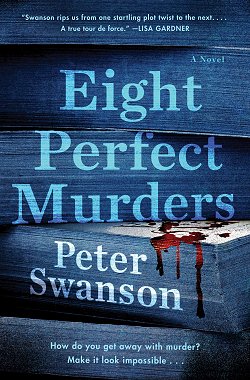 First Line: The front door opened, and I heard the stamp of the FBI agent's feet on the doormat.

When an FBI agent came knocking on bookseller Malcolm Kershaw's door, he had no idea that a blog post he wrote years ago was about to come back to haunt him. Titled "Eight Perfect Murders," the post listed his picks of the mystery genre's most unsolvable murders-- those that are almost impossible to crack-- and now there's someone who's using that list to kill people. To make matters even worse, the killer is watching Malcolm's every move, and he knows way too much about Mal's personal life, including secrets that have never been told to anyone. To protect himself, Mal has no choice but to do some investigating of his own.

The voice of Malcolm Kershaw in Peter Swanson's Eight Perfect Murders won me over immediately even though it's crystal clear within the first few sentences that he's an unreliable narrator. (He even admits it.) Furthermore, he's the owner of a bookstore specializing in mysteries, and he doesn't read the genre. Interesting, eh? So the more readers fall under Mal's spell, the more they wonder just how much they can trust what he's telling them.

The city of Boston came alive for me as I read, and I loved all the literary and mystery allusions. By about the halfway mark, if readers stop and think about it, the identity of the killer is rather obvious, but I found myself not wanting to think about it and just let the story take me along for a very enjoyable ride.

One of my favorite passages in the book is this: "Books are time travel. True readers all know this. But books don't just take you back to the time in which they were written; they can take you back to different versions of yourself." I've found this to be true. If you're in the mood for a damaged main character with a compelling voice who will draw you into the world of books and mysteries and killers on the loose, pick up a copy of Eight Perfect Murders. It's a good'un, and I'm hoping to hear from Mal Kershaw again.