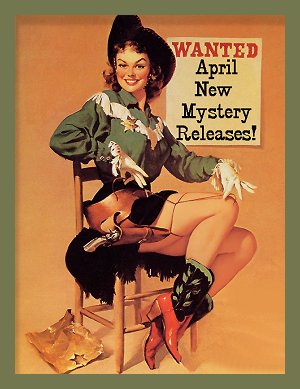 How are all of you faring with social distancing? It's been the status quo for me for several months, so I'm not feeling that much difference. I've been much more concerned about Denis, who continues to work at the airport.

I may be used to social distancing, but I'm sick and tired of it. You would think that I'd be reading up a storm, but lately I've been spending a lot of time reorganizing several areas of the house and trying a new knitting pattern that's trying its best to defeat me.

But it doesn't matter what my mental state is, I will always be on the lookout for new books to read. The following are my picks of the new crime fiction being released throughout the month of April. I have them grouped according to release dates, and book covers and synopses are courtesy of Amazon. Let's take a look at this list of mine, shall we? 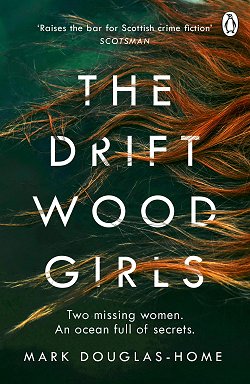 Title: The Driftwood Girls
Author: Mark Douglas-Home
Series: #4 in the Sea Detective series set in Scotland and the Netherlands.
400 pages

*See my review of the UK edition.

Synopsis: "Twenty-three years ago, Christina Tolmie vanished without a trace from northern France, leaving her young daughters Kate and Flora orphaned and alone. Now Flora is also missing. In desperation, Kate searches her Edinburgh house, and finds a piece of notepaper with just one name: Cal McGill. Cal is a so-called sea detective, an expert on the winds and the tides, and consequently an exceptionally gifted finder of lost things - and lost people. Kate hopes that Cal might not only find her sister but also unlock the mystery that has overshadowed both women's lives: what happened to their beloved mother all those years before? Unfortunately, Cal doesn't think he can help. But that's only because he hasn't yet realized that the dark undercurrents of the case will ultimately lead him back dangerously close to home..." 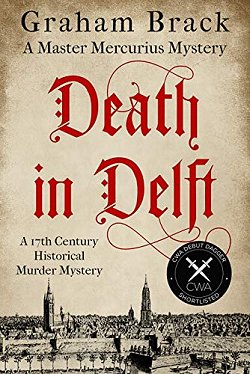 Three young girls have been abducted from their homes.

The body of one has been found in a shallow grave. The other two are still missing.

The murder has shocked everyone in the peaceful city of Delft and the mayor is desperate to catch the perpetrator before panic can spread any further.

With the bitterly cold January weather intensifying it is doubtful that the other two girls are still alive.

But whoever took them is still at large.

The mayor requests the help of Master Mercurius, a gifted cleric from a nearby university, and local artist Vermeer, who uses his skills to sketch the crime scenes.

Can they find the missing girls before it’s too late? Will Mercurius be able to track down the killer?

Or will more victims succumb to Death in Delft…? 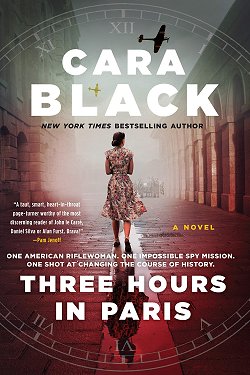 Synopsis: "Kate Rees, a young American markswoman, has been recruited by British intelligence to drop into Paris with a dangerous assignment: assassinate the Führer. Wrecked by grief after a Luftwaffe bombing killed her husband and infant daughter, she is armed with a rifle, a vendetta, and a fierce resolve. But other than rushed and rudimentary instruction, she has no formal spy training. Thrust into the red-hot center of the war, a country girl from rural Oregon finds herself holding the fate of the world in her hands. When Kate misses her mark and the plan unravels, Kate is on the run for her life—all the time wrestling with the suspicion that the whole operation was a set-up.

Cara Black, doyenne of the Parisian crime novel, is at her best as she brings Occupation-era France to vivid life in this gripping story about one young woman with the temerity—and drive—to take on Hitler himself." 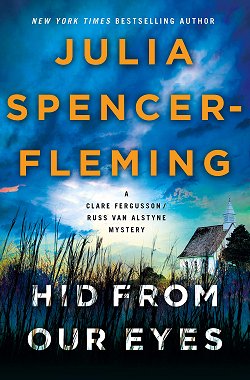 Synopsis: "1952. Millers Kill Police Chief Harry McNeil is called to a crime scene where a woman in a party dress has been murdered with no obvious cause of death.

1972. Millers Kill Police Chief Jack Liddle is called to a murder scene of a woman that's very similar to one he worked as a trooper in the 50s. The only difference is this time, they have a suspect. Young Vietnam War veteran Russ van Alstyne found the body while riding his motorcycle and is quickly pegged as the prime focus of the investigation.

Present-day. Millers Kill Police Chief Russ van Alstyne gets a 911 call that a young woman has been found dead in a party dress, the same MO as the crime he was accused of in the 70s. The pressure is on for Russ to solve the murder before he's removed from the case.

Russ will enlist the help of his police squad and Reverend Clare Fergusson, who is already juggling the tasks of being a new mother to her and Russ's baby and running St. Alban's Church, to finally solve these crimes.


Readers have waited years for this newest book and Julia Spencer-Fleming delivers with the exquisite skill and craftsmanship that have made her such a success." 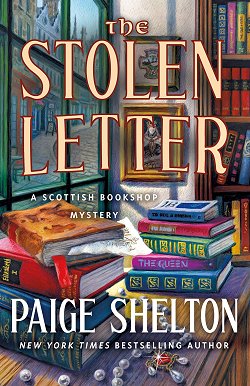 Synopsis: "Delaney Nichols is confident she’s doing what she loves―case in point, just one day after returning from her fabulous European honeymoon, she’s eager to get back to the Cracked Spine, the bookstore where she works. But as she disembarks her bus and hurries toward the shop she and another woman collide, sending a stack of books the woman is carrying to the ground.


But when Mary’s husband dies in a car explosion―and Delaney learns he was the very member of city council who proposed that the city take a closer look at the bookshop’s construction―she starts to wonder if her meeting with Mary wasn’t an accident. Edinburgh has become as filled with intrigue and deception as any European court, and Delaney is determined to get to the bottom of this royal mystery." 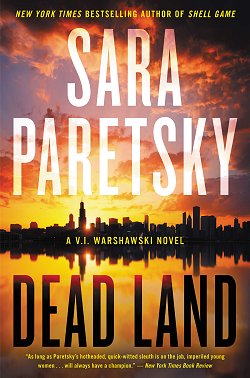 Synopsis: "Chicago may be the city of broad shoulders, but its political law is “Pay to Play.” Money changes hands in the middle of the night, and by morning, buildings and parks are replaced by billion-dollar projects.

Chicago PI V.I. Warshawski gets pulled into one of these clandestine deals through her impetuous goddaughter, Bernie Fouchard. Bernie tries to rescue Lydia Zamir, a famed singer-songwriter now living on the streets; Zamir’s life fell apart when her lover was murdered next to her in a mass shooting at an outdoor concert. Not only does Bernie plunge her and V.I. headlong into the path of some ruthless developers, they lead to the murder of the young man Bernie is dating. He’s a computer geek working for a community group called SLICK.


V.I. is desperate to find a mysterious man named Coop, who roams the lakefront in the middle of the night with his dog. She’s sure he holds the key to the mounting body count within SLICK. Coop may even know why an international law firm is representing the mass murderer responsible for Lydia’s lover’s death. Instead, the detective finds a terrifying conspiracy stretching from Chicago’s parks to a cover-up of the dark chapters in America’s meddling in South American politics. Before she finds answers, this electrifying novel pushes V.I. close to the breaking point: People who pay to play take no prisoners." 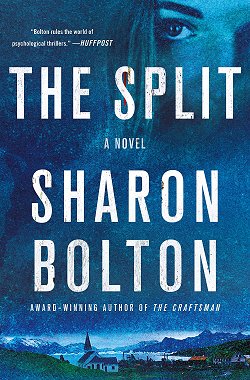 Synopsis: "The remote Antarctic island of South Georgia is about to send off its last boat of the summer – which signifies safety to resident glaciologist Felicity Lloyd.

Felicity lives in fear – fear that her ex-husband Freddie will find her, even out here. She took a job on this isolated island to hide from him, but now that he's out of prison, having served a term for murder, she knows he won’t give up until he finds her.


But a doctor delving into the background of Felicity and Freddie's relationship, back in Cambridge, learns that Felicity has been on the edge for a long time. Heading to South Georgia himself to try and get to her first is the only way he can think of to help her." 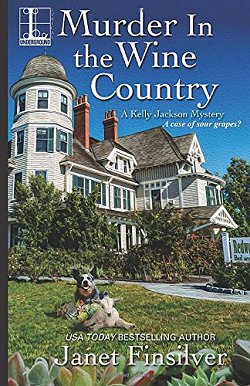 Synopsis: "Kelly Jackson, manager of the Redwood Cove Bed and Breakfast, is excited to participate in an event to raise awareness for the plight of struggling veterans in their Northern California coastal community. Local wineries are sponsoring tastings, and to prepare for a culinary competition, professional chefs will forage for wild edible greens. Kelly plans to come along, despite a warning to beware of poachers, who have been stealing the highly valued succulent Dudleya farinosa. The senior sleuths who call themselves the Silver Sentinels join forces with environmental activists known as the Succulent Saviors to thwart the poaching operation. When a consultant for the sale of a local winery is murdered, the poachers are suspected—but so is a wine merchant, Kelly's friend Phil. As Kelly and the Silver Sentinels attempt to root out the real killer, what she digs up might just put her permanently underground . . . " 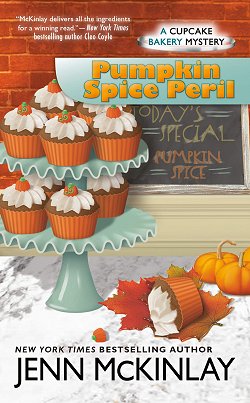 Synopsis: "Life is all sugar and spice for the Fairy Tale Cupcake bakers--Melanie Cooper is engaged to the delectable Joe DeLaura, Angie Harper and her husband Tate are savoring married life, and the bakery is bustling with happy customers. Until one of their most valued cupcake connoisseurs ends up dead.

Local glass artist and cupcake lover Rene Fischer-Klein has always suffered from a wide variety of health issues. In an effort to cheer her up, her doting husband, Peter, brings her a four-pack of her favorite cupcakes every week. But when the police discover that Rene has been poisoned, there's no sugarcoating the fact that the last things she ate were the bakery's signature pumpkin spice cupcakes! With their lives and bakery at stake, it's up to Mel and Angie to find out who poisoned their artist friend and why, before their future is frosted for good." 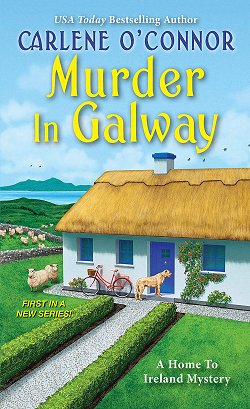 Synopsis: "New Yorker Tara Meehan's first trip to Galway may be her last...

Tara never imagined her introduction to Ireland like this--carrying her mam's ashes to honor her final request: "Tell Johnny I'm sorry...Take me home." She's never met her mam's estranged brother, Johnny Meehan, who owns an architectural salvage business in Galway. Although Tara is immediately charmed by the medieval city, the locals seem wary of strangers and a gypsy warns her that death is all around.

When Tara arrives at her uncle's stone cottage, the prophecy seems true. A dead man lies sprawled over the threshold in a pool of blood. The victim turns out to be Johnny's wealthiest client, and her missing uncle is the garda's number-one suspect. In trying to find Johnny and solve the crime, Tara uncovers her mam and uncle's troubled past. But with a desperate killer about, she had better mind herself, or they'll be tossing her ashes in Galway Bay..."

Well, how did I do? Did any of these titles make it to your own wishlists? Which ones? Inquiring minds would love to know!