The Fraud by Brad Parks 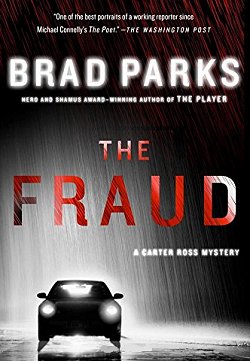 First Line: It's the hypothetical question every parent considers at some point: Would you give your life for your kid?

There's a rash of carjackings in Newark, but no one considers it newsworthy until one such theft ends in the murder of a wealthy banking executive. When journalist Carter Ross is assigned to cover the story, he wants a different angle; he's tired of writing about victims of crime who happen to be rich and white. To balance out his story, he finds a Nigerian immigrant of more modest means who was also killed during a recent carjacking.

When Ross finds out the two victims knew each other, he digs deeper, uncovering a deadly band of car thieves. It's a discovery that puts his unborn child in harm's way-- and Ross will do anything it takes to protect his child.

Brad Parks' Carter Ross series is no stranger to my annual Best Reads list, and I've been delaying reading the last one because I didn't want my time with the wisecracking journalist to end. Unfortunately, I didn't find The Fraud to be nearly as satisfying as the other books in the series.

I always learn something new about Newark, New Jersey when I pick up a Carter Ross mystery, and this book was no exception, but the whole book had less zip than all the others. I put it down to Ross's impending fatherhood. Every time his phone rings he goes nuts, thinking it's time to make the dash to the hospital. Also, The Fraud is pretty much a solo gig for our intrepid journalist. Everyone from the newsroom makes only token appearances and the villains are mostly offstage as well. It's this interaction with the marvelous cast Parks has created that I really missed.

The one thing I did not miss was an excellent mystery. Every time I thought I had it figured out, it changed directions, and I love that. (It's also something that the author is quite skilled in doing.)

I'll miss having new Carter Ross mysteries to read, but I wish Brad Parks all the best with his domestic thrillers. He is a very talented writer.