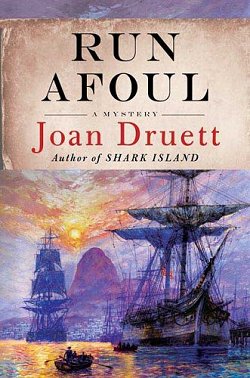 First Line: As he slumped exhaustedly in the cutter that pulled from the brig Swallow to the expedition flagship Vincennes, Wiki Coffin wondered if he smelled as bad as Lieutenant Forsythe.

As the Vincennes, the flagship of the U.S. Exploring Expedition, leads the convoy into the Brazilian port of Rio de Janeiro, careless maneuvering causes one of the vessels to run afoul of a Boston trading ship. Not only is this a shocking embarrassment, but the Boston trader is captained by expedition linguist Wiki Coffin's father.

The encounter reunites Captain William Coffin with his illegitimate half-Maori son and sets in motion a series of events that will see two men dead, William Coffin on trial for murder, and Wiki feverishly trying to find the real killer before the expedition leaves port.

The U.S. Exploring Expedition was a real expedition led by the eccentric Charles Wilkes. Expert maritime historian Joan Druett had the perfect idea to use this as the basis of a mystery series that would travel the world. I really enjoyed the first two books in the series, A Watery Grave, and Shark Island, so it was well past time to move on to the third book. Run Afoul did not disappoint.

I've read Joan Druett's non-fiction, and this woman knows her stuff. Every time I pick up a Wiki Coffin mystery I learn something without ever feeling as though I'm sitting in a classroom. In one Wiki Coffin mystery, I learned about firing cannons and felt as though I had to duck and run for cover. In this one, I learned about one ship running afoul of another and the nasty but necessary procedure for ridding a ship of rats.

Run Afoul has an excellent mystery that kept me guessing, and I enjoyed watching Wiki trying to solve it. Speaking of the main character, he is a bit of a rogue. This is book three, and it looks as though the young man is going to have a woman in every port, but the romance is certainly not overdone. No, Run Afoul is about the mystery, the superb setting, the fascinating Wiki Coffin, and the sea. It's an unbeatable combination for any historical mystery lover.