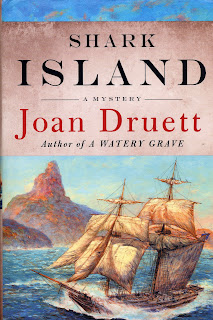 First Line: The hours were dragging.

It could be that I love well-written books about the sea because there are so many sailors in the family. (I even married an ex-submariner.) New Zealand author Joan Druett has long been one of my favorites for maritime history. When I discovered that she'd begun writing a historical mystery series based on the travels of the United States South Seas Exploring Expedition of 1838 to 1842, I was thrilled. What a perfect movable feast of a setting for a mystery series! If you're one of the many who've never heard of this American expedition, here are a few words about it from Joan Druett herself:


...huge tracts of the ocean had been charted, plus 800 miles of scarcely known Oregon shore and 1,500 miles of entirely unknown Antarctic coast. The Stars and Stripes had fluttered off the lagoons of well over 200 tropical islands, and more than 4,000 artifacts and 2,000 scientific specimens had been collected, an enormously rich fund that became the foundation of the collection of the new Smithsonian Institution.

As you can see from that small description alone, this is an incredibly rich fishing ground for a mystery series. The detective of the series is half-Maori, half-white Wiki Coffin. Due to his skill in linguistics, he's been hired by the expedition as an interpreter.

In this second book in the series, the ship Wiki is aboard is told to sail to Shark Island off the coast of Brazil to check into an alleged sighting of pirates. When they arrive, they discover a wrecked sealing ship and its crew. They've barely agreed to stay and begin repairs on the ship when its captain is murdered. While the sealing ship is being repaired, Wiki has little choice but to try to find the murderer of the captain... especially since the dead man was the husband of one of Wiki's old flames (who just happens to be on board, too).

I enjoy Druett's writing. She includes so much detail on life aboard ship, on ship repair, on sailing itself, and it's all added so seamlessly into the narrative that I never feel as though I'm reading a gigantic lesson with a quiz to follow at some unspecified date. There is one scene in particular that startled me so badly I almost leapt out of bed (which I thought was a very good thing since I'm so seldom surprised to that degree). The only real quibble I have with the entire book is that the culprit was a bit obvious to me, but it is a very small complaint indeed.

This series is one that I am purposely savoring; reading it very slowly to enjoy the character of Wiki, a wealth of new knowledge, and the settings. If you haven't tried any of Druett's books, I suggest that you do. Non-fiction or historical mystery, you are in for a treat.