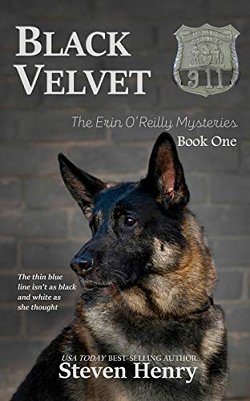 Officer Erin O'Reilly has gotten used to the high crime rate, terrible hours, and lack of a personal life that comes with working nights for the NYPD. When she and her K-9 partner Rolf switch over to the day shift, things are definitely looking up. She even has time for a new boyfriend.

But when the theft of a priceless painting from the Queens Museum leaves a fellow police officer dead, Erin and Rolf find themselves dealing with dangerous criminals and shady art dealers. Erin knows she has the inside track in this investigation regardless of being forced to fight obstructive detectives every step of the way, and she's determined to do whatever it takes to solve the case.

With the odds stacked against her, can Erin and Rolf capture the killers and solve a 75-year-old crime?

Black Velvet, book one of Steven Henry's Erin O'Reilly mystery series, shows a lot of potential for a long-running series. It's fast-paced, has a strong female lead character, and the art theft mystery and action scenes keep readers guessing and turning the pages.

This book is all Erin all the time. The book showcases her dedication, her intelligence, and her determination. She proves to be quite gifted as a detective but needs to make the move from being on patrol for the NYPD. Hopefully, future books in the series will add more characters to bring needed depth to the stories. It surprised me a bit that Erin's K-9 partner Rolf takes more of a backseat in Black Velvet than in other series I've read, but that may also change as the series progresses.

Black Velvet is a fast-paced book with an interesting lead character and an intriguing mystery. It will be interesting to see how the series moves forward.