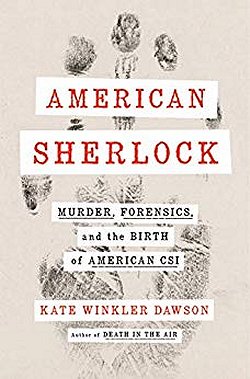 First Line: His upper jawbone was massive-- a long, curved bone with nine tiny holes meant to hold his teeth.

In his private science laboratory (the nation's first), a man named Edward Oscar Heinrich would become known as the "American Sherlock Holmes." He was one of America's greatest-- and first-- forensic scientists who would crack at least two thousand cases in his forty-year career.

Heinrich became one of the nation's first expert witnesses in an era when the chaos of Prohibition led to sensationalized crime reporting and only a very small, systematic study of the evidence.

After reading Kate Winkler Dawson's Death in the Air and attending one of her events for American Sherlock, I had to read this book. It was absorbing.

Beginning with the impact the death of his father had on him, to working in a drugstore (which he called "a veritable laboratory in behavioristic psychology" and handwriting analysis), to the building of his own private laboratory and work as a forensic scientist and expert witness, American Sherlock portrays a complex and formidable man who earned his nickname because no one else before or since has had his expertise in so many disciplines.

In reading this book, all sorts of fascinating facts come to light-- like what led to Walgreens' phenomenal expansion in the 1920s. Readers also learn that Heinrich couldn't have reached his unbelievable level of expertise without the help of two men: law enforcement officer August Vollmer, who deserves a book of his own, and Heinrich's closest confidante, John Boynton Kaiser, a reference librarian who kept his friend supplied with the latest in scientific publications.

The best parts of this book are watching Heinrich at work solving crimes; it can be riveting. Heinrich also had several rivalries with fellow "expert" witnesses, and in the process of watching these other men during trials, Heinrich learned how to present his own findings-- because getting the juries to accept the science was the hardest part of his job.

American Sherlock ends on a cautionary note. The United States needs a centralized and standardized system of forensics. It should take more than a forty-hour course for someone to be regarded as an expert in any forensic discipline. Every state should have the exact same requirements across the board. If that is done, our criminal justice system will be vastly improved.