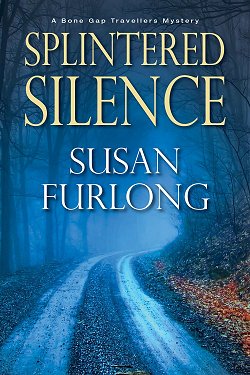 First Line: The sound of gunshots cut through my nightmare and jarred me from my sleep.

Both bearing the scars of battle, former Marine MP Brynn Callahan and her canine partner Wilco find themselves in Bone Gap, Tennessee, the place where Brynn grew up. Brynn was raised in the insular culture of the Irish Travellers, and she enlisted to escape its narrow confines as well as the vocal prejudices of the "settleds"-- non-Traveller townspeople.

Splintered Silence is a well-written, strong mystery that I wish I had liked more. It's fast-paced, with plenty of misdirection, and a strong sense of place. There are three things I enjoy most in my reading: setting, story, and characters. It's that third category of character that I had trouble with-- and not because the characters are badly written. Quite the contrary.

Yes, my subjective likes and dislikes have reared their ugly heads, although I will say that poor, battered Wilco is probably my favorite fictional war dog. (He's deaf, three-legged, has PTSD, and a list of strengths a mile long.) No, it's the humans I really didn't like. The townspeople who hate the Travellers even though they haven't bothered to learn a thing about them are just the sort of people I have no time for. The Irish Travellers themselves, with their endless lists of do's and don't's, are just as prejudiced as the folks they refer to as "settleds". And Brynn herself, on a downward spiral aided by prescription drugs and alcohol, highlights one of my many shortcomings-- my utter lack of patience for drunks. At least she begins to shed her dependence on them the more involved she becomes in the investigation.

If you do not share my personal and very subjective dislikes, you should really enjoy Splintered Silence. It was named one of the Top 25 Mysteries of 2017 by Strand Magazine, and I can see why. My reading self wants to love this book. Unfortunately, my emotional side has overruled it. This is most definitely a case where your mileage can (and probably will) vary!