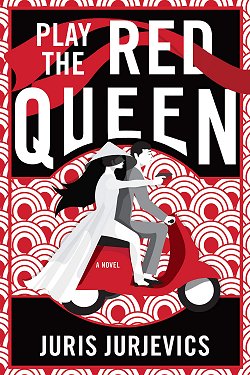 It's 1963, and there are military advisors in South Viet Nam working to stop the spread of Communism. Of the sixteen thousand American servicemen there, only six Army Criminal Investigation Division soldiers have been assigned to solve all the crimes. Two of them are Ellsworth Miser and Clovis Robeson. They are in charge of finding the young female Viet Cong assassin who's killing US Army officers with a single pistol shot then riding off on the back of a scooter. However, once they begin investigating, they understand that identifying the daring assassin is not going to be easy. And neither is staying alive. Too many things are at stake.

Although Play the Red Queen could have been tightened up a bit more to keep the flow of the story moving, I did like the book. One of the two investigators had what I thought was an unnecessary love affair, but perhaps the author meant to show just how many countries were interested in what was going on in South Viet Nam.

The daring young female assassin is played up in the synopsis-- and it is a good storyline-- but what I found to be more interesting was the fact that Play the Red Queen is actually a snapshot of a time and a place. As social history, the book is often fascinating (and infuriating). As is stated in A Note from the Author's Widow at the end of the book, Jurjevics wrote about "an underreported aspect of the Viet Nam war: 'the elaborate, even treasonous corruption-- and our complicity in it.'" Finding out just how elaborate that corruption was shouldn't have surprised me so much, even while the identity of the assassin wasn't surprising at all.

For some reason, I felt as though there should have been a bigger payoff at the end of the book. Perhaps that feeling of satisfaction never came because I already knew the end of the story. Yes, I did have mixed reactions to Play the Red Queen, but I am glad that I read it. Your mileage may vary.