The Words I Never Wrote by Jane Thynne 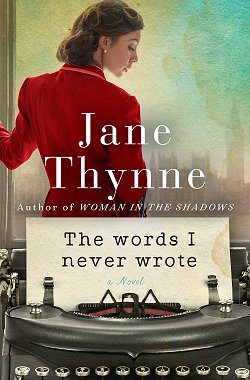 Juno Lambert can't resist buying the 1931 Underwood typewriter that once belonged to famed journalist Cordelia Capel. Once she gets home, she opens the case and discovers an unfinished novel that compels her to go to Germany to fill in the gaps of the story of Cordelia and her sister and the secrets that lie between them.

Jane Thynne's The Words I Never Wrote employs a dual timeline that often can work beautifully, but in the case of Juno and the Capel sisters, it doesn't work quite as well.

For me, Juno is the weakest link. Her up-and-coming film star boyfriend's desertion to Hollywood has made her indecisive, and more than compulsion, her decision to go to Germany to uncover the Capel sisters' story seems to be simple avoidance. And speaking of that boyfriend of hers, every move he makes, every word he speaks is utterly predictable. It would have been better if he wasn't in the book at all, leaving Juno to follow her passion more naturally. (Or this timeline could have been left out entirely, leaving more time for the intriguing Capel sisters.)

The story of Cordelia and her sister Irene is very strong. Cordelia's career in journalism begins in 1936 Paris with fashion columns in the newspaper. But she's very politically motivated, so she doesn't describe fabrics and hemlines for long. Cordelia's older sister Irene takes a much more glamorous route. Irene marries a German industrialist and finds herself in a lakeside mansion in Berlin. The sisters are close and exchange letters, but when Cordelia learns that Irene's husband is a Nazi sympathizer, she insists that Irene takes a stand against Nazism and leave Berlin. Irene chooses to stay, and Cordelia breaks off communication.

Thynne paints a vivid portrait of Nazi Berlin before, during, and after the war that I found fascinating. How the two sisters spent the war years also kept me turning the pages, as I wondered how long it would take the younger, idealistic Cordelia to learn that there is more than one way to take a stand for what you believe in. The only other thing in The Words I Never Wrote that bothered me-- besides Juno the present-day narrator-- was the feeling that, no matter how much I learned about Cordelia and Irene, I still wasn't being let in. These two characters were still standing back and not sharing their lives fully-- and I wanted them to. I wanted to tell them that the Gestapo wasn't sitting in the room with me. I wanted to feel as though I were sharing their lives, and I wasn't being allowed to. It's this aloofness and Juno that make me like Thynne's story... but with serious reservations. Your mileage could certainly vary.