The Widows by Jess Montgomery 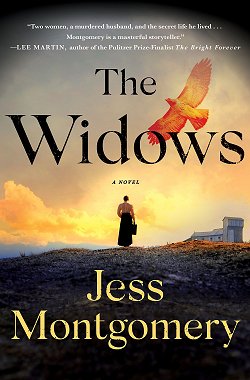 Kinship, Ohio, 1924. When Sheriff Daniel Ross is killed while transporting a prisoner, his wife Lily vows to get to the bottom of it all. You see, things about her husband's death just aren't adding up. Fortunately, she's been named interim sheriff which should help her investigation.

Hours after the funeral, Marvena Whitcomb appears at Lily's door. A coal miner's widow, she doesn't know Daniel is dead and wants to know if he's found out anything about her missing daughter.

Amidst all the danger involved with attempts to unionize the local coal mine, the two widows find themselves joining forces to find out what happened to Marvena's daughter and to Daniel. The only trouble is, the more they investigate, the more they realize that Daniel really wasn't the man either of them thought he was-- and his murder is far from simple. Both women are widows. Both women have young children. Both are going to have to tread very carefully to find the truth.

I have to say that I was captivated by The Widows from the minute I began reading, and it does have a lot to do with my own personal experience. My mother was a widow (wife at eighteen, mother at nineteen, widow at twenty), so I know how tough and protective women on their own can be. Secondly, I come from a small farm town that used to be a mining town. On Christmas Eve 1932, methane gas built up in the mine, the barometric pressure dropped, the man who was going to be Santa that night at the community center flipped the switch to the lights down in the mine, and... no more mine. Fifty-four men died that day. Several sets of fathers and sons, brothers, uncles... My mother grew up with those men's children. Why am I yammering on about this? Because in those first few pages of The Widows when the methane gas begins to build in the coal mine known as The Widowmaker outside Kinship, chills ran up my spine. A connection was formed right then and there that never wavered throughout Montgomery's story.

The setting is pitch perfect, and the characters of Lily and Marvena are wonderful and completely capable of surprising everyone with just what they can do and how they can figure things out. They aren't just trying to find a killer. Lily, in particular, is also dealing with an extremely volatile situation concerning the mine owner who wants unionizers kept off his property, and to top it all off, the Volstead Act means that she's got to take care of moonshiners, too.

The excellent characterization also extends to Daniel, who moves from being a caricature of the heroic sheriff to being much more sharply delineated and "human." There's even a bad guy named Vogel who's so scary that if I were to turn around and find him standing behind me, I'd probably shatter into a million pieces.

In reading The Widows, you can learn about the dangers of being a miner and the importance of unions, you're treated to some excellent characters and one fine, twisty mystery that I loved even if I did figure out the identity of the spider at the center of the web early on. I can't tell you how happy I was when I learned that this is the first book in a series. I can't wait to get back to Kinship, Ohio, to be with Lily and Marvena again!