Script for Scandal by Renee Patrick 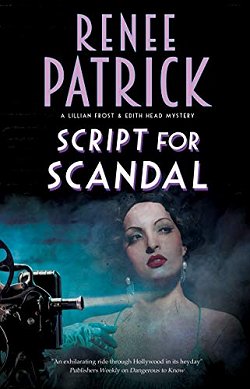 First Line: I had narrowed my options down to the corned beef hash or the turkey sandwich.

Lillian Frost is astounded when her friend, costume designer Edith Head, hands her a script for a movie called Streetlight Story. Based on an actual bank robbery, the script says the mastermind of the robbery is none other than Lillian's boyfriend, LAPD detective Gene Morrow.

Now Gene is at the center of a scandal that mixes fact and fiction. Streetlight Story is becoming the hottest ticket in town, there's an unexplained death on the Paramount Studio lot, and the police have reopened the case that inspired this new script. Since Gene doesn't seem to be doing anything to clear his name, Lillian refuses to rest until she has answers. With Edith's help, will Lillian be able to uncover the truth?

I'm glad that mysteries set in the glamor days of Hollywood seem to be on the rise, and I'm particularly happy that there is a new Lillian Frost and Edith Head mystery by the writing team known as Renee Patrick. Script for Scandal is a rip-roaring banquet of a read that has a little something for everyone.

There's a real feel for Hollywood in the late 1930s, with one character working to infiltrate local Nazi groups-- which could be a very dangerous thing to do. Readers learn about the (mis)behavior of some of the movie stars of the day, and laughs are provided when Lillian's boss gets a part as an extra on a film and then begins to worry himself into a tizzy about it. This leads to "acting lessons" from both Bette Davis and Joan Crawford, and I could actually hear both actresses' voices in my head as I read.

There's a nice twisty mystery to solve in which Virginia Hill and Bugsy Siegel play parts, and if you like clothes, you're going to like Script for Scandal. Lillian and Edith play well against each other. Lillian is the more intuitive, emotional "detective" while Edith's eye for detail and her tendency toward observation means that she picks up on things that everyone else misses.

Readers never know which stars they're going to run into in one of these books, and this is part of the series' charm. I really enjoy how the authors portray real historical figures. If you like excellent period detail, strong mysteries, and two strong, independent female leads, chances are excellent that you will enjoy this series. Hollywood is just the icing on the cake. Give it a try!