The Story Keeper by Anna Mazzola 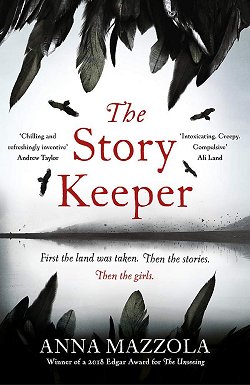 First Line: Shrieking split the leaden sky and Audrey looked up to see a host of birds, their wings ink-black against the grey.

It is 1857, and the Highland Clearances have left the Isle of Skye devastated, its remaining people mired in poverty. It is here that young Audrey Hart has come to help collect the folk and fairy tales of the people and communities.

When Audrey discovers the body of a young girl washed up on the beach, the crofters tell her that it's only a few weeks since another girl disappeared. The locals believe that the girls are victims of restless dead spirits that take the form of birds.

But Audrey becomes convinced that the girls' disappearances have nothing to do with the supernatural, and as she sets out to prove her theory, she finds her own life in danger.

The Isle of Skye, reeling from the Clearances, is the perfect atmospheric setting for Anna Mazzola's Gothic suspense novel, The Story Keeper. Newly arrived from London, young Audrey Hart is eager to begin collecting folk and fairy tales. But the locals are distrustful. To them, Audrey represents the people who burned so many of them out of their homes, the people who stole friends and family and sold them as slaves in America, the people who have forbidden them to speak their own language and share their own stories. It doesn't even really help if Audrey tells them that her mother was a Scot who often visited Skye to collect stories. Too much pain, so many losses, have colored the way these people feel-- and who can blame them?

The Story Keeper comes close to being the typical Gothic suspense novel (creepy house, strange behavior from the locals, bad weather, etc.), but Mazzola weaves so much of the life of the people into her story that it rises above the genre. And Audrey isn't the typical naïve heroine. She has an a-ha moment that should make all readers stop and think when she's "...wondering how many crimes had been concealed by claims of the mystical." Once she has that thought, The Story Keeper transforms from a typical Gothic novel to a murder mystery.

I really enjoyed The Story Keeper for the descriptions of the Isle of Skye, for the weaving of social history into the narrative, for the folk and fairy tales, and for its murder mystery (even though it wasn't very difficult to deduce the villains). I'll definitely be on the lookout for more of Mazzola's writing.