A House of Ghosts by W.C. Ryan 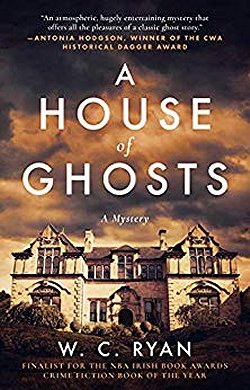 First Line: The sea was black as ink and the small fishing boat, travelling under a loose sail, moved slowly across its glass-flat calm.

It's the winter of 1917, and so many people who have lost loved ones in the brutal fighting of World War I are finding it difficult to let go. Spiritualism and séances abound. Armaments industrialist Lord Highmount has invited a group of people to Blackwater Abbey, his country house on an island off the coast of Devon. The purpose of the gathering is an attempt to contact his two sons, both of whom died at the front.

Two of the guests have been sent by the British intelligence service. One, Kate Cartwright, is a friend of the family who lost her brother at the Somme and who has her own special gift in terms of the spiritual. The other is Captain Donovan, who recently returned from Europe. Top secret plans for weapons developed by Highmount's company have turned up in Berlin, and British intelligence believes that enemy spies will be in attendance at Blackwater Abbey.

As the guests arrive, it is clear that they all have things they'd rather keep hidden. When a storm descends, they are all trapped on the island, and then someone dies...

As a teenager, I loved reading Gothic suspense novels. I couldn't get enough of the creepy old houses, atmospheric settings, and (often) searches for treasure. W.C. Ryan's A House of Ghosts fits into the Gothic suspense genre beautifully. Blackwater Abbey is hundreds of years old, the site of an ancient monastery, and it is absolutely filled with secret doors, rooms, and passageways. I wish the place were real so I could wander around it myself. The atmosphere was tense, and when the storm descended, it added to the frayed nerves of the people in the house: "It seemed as though the house and the wind were having a conversation" (and it wasn't a good one).

The two main characters, Kate Cartwright and Captain Donovan, were strong, intelligent people who were quick thinkers in dangerous situations-- even when sparks flew between them. Kate, like many of the women in her family, could see ghosts. Just see them, not talk with them, and she also had the FitzAubrey glass, an ancient mirror that women in her family could use to glimpse the future.

One of the elements of A House of Ghosts that really ratcheted up the suspense was the presence of ghosts. Around the pier on the island, the spirits of the drowned collected. In Blackwater Abbey, home of a man who made his fortune in munitions, dead soldiers kept gathering-- and the house already contained the spirits of many of its former residents. Yes, the ghosts were a strong force in the book, and they led me to believe that the ending was going to be explosive... but it wasn't. They were used and then discarded, almost as though the author didn't want his novel dismissed as a mere lightweight ghost story.

However, even though I found the ending to be a slight letdown, I still really enjoyed A House of Ghosts. Ryan left a suggestion at the end that may mean there will be at least one more book featuring Cartwright and Donovan, and I hope there is.