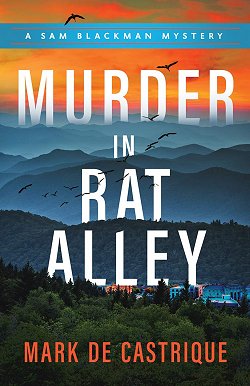 A body unearthed during a forest fire at the Pisgah Astronomical Research Institute outside of Asheville, North Carolina, should have caused barely a ripple; the body had been there a long time. But soon thereafter, a member of a mountain music group is found murdered in Rat Alley. The victim? The fiancée of the man found buried at the Institute. There has to be a reason. There has to be a connection between the two, and private investigator Sam Blackman and his partner Nakayla Robertson are determined to find out what it is.

I never would have known how interesting a spot Asheville, North Carolina is if not for Mark de Castrique's Sam Blackman mysteries. de Castrique is a master at blending past and present into engrossing tales, and Murder in Rat Alley is certainly no exception.

Much of the action revolves around the Pisgah Astronomical Research Institute, a real place that monitored space programs during the Cold War and now plays a vital role in gathering weather and climate data. The dead man was a computer genius who worked there, and the dead woman was his fiancée. Everyone assumed that the dead man just got cold feet and disappeared one night, but the discovery of his body close to the Institute buildings tells Sam and Nakayla that something more sinister is afoot. The two begin teasing out clues to what happened with some hair-raising results. When the killer was revealed, I told myself that I should have known-- much, much earlier the character had said something that should have made my clue detector go TILT.

I really enjoy this series for what I learn about Asheville's history and for the mysteries that are always fun to solve, but the glue that holds everything together is the team of Sam and Nakayla, an interracial couple who are first-rate investigators. They also have a great sense of humor and a fantastic support group that includes an eccentric lawyer and a veteran cop-- and a coonhound named Blue who likes to sleep a lot.

Whenever I know there's a new Sam Blackman mystery, I start packing my bags for Asheville. If you like the perfect blend of mystery, history, humor, and characterization, you should join me.