The Wrong Girl by Donis Casey 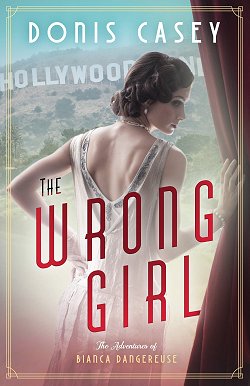 First Line: Ted Oliver drove up Santa Monica Boulevard to Beverly Drive, then turned onto Summit and wound up the steep side of San Ysidro Canyon until he reached the ten-acre estate of beloved motion picture celebrity Bianca LaBelle, star and living embodiment of the Bianca Dangereuse serials, the biggest money-making movie franchise in the entire Western world.

No other human can fall into the deepest depths of boredom like a teenager, and Blanche Tucker is a fifteen-year-old who's bound and determined to get out of boring old Boynton, Oklahoma and away from her boring old family. When she meets up with film producer Graham Peyton, it's as if all her wishes and dreams come true at once. In no time at all, she's on the road to Hollywood with Peyton, sure that she's just a step away from fame and fortune.

But Peyton is a predator, not a producer, and it's only through quick thinking, hard work, and a bit of luck that Blanche does indeed find her way to Hollywood. Six years later, she's been transformed into Bianca LaBelle, the reclusive star of a series of wildly popular adventure films. When Peyton's remains are uncovered on a Santa Monica beach, is there a connection to Blanche/Bianca? Private detective Ted Oliver is determined to find out what really happened.

Long-time fans of Donis Casey's Alafair Tucker series about a crime-solving farm woman in 1910s Oklahoma just might remember Alafair's daughter Blanche from The Wrong Hill to Die On when Blanche was sent to Arizona to recuperate from a respiratory ailment. Of all Alafair's children, Blanche was the prettiest and the most dissatisfied with life on the farm. As far as Blanche was concerned, Boynton was just a flyspeck on the map and not worthy of notice, so she's the perfect Tucker rebel to start a new series.

Yes, Alafair and other family members are mentioned in The Wrong Girl-- and some of those "mentions" made me laugh-- but this is Blanche's show, and she turns out to be one very fine actress. The main thing I liked about her was that she admitted when she did stupid things and used her intelligence and what she learned at her mother's knee to get past the bad bits and persevere to get what she wanted.

The Wrong Girl is a departure for Casey. We move from Oklahoma slang to 1920s Hollywood slang. The outlook is fresh and spirited. Blanche is showing readers how fast the country was changing during the '20s. The chapter headings are the dialogue cards used during old silent movies, and I have to admit that the fast pace and all the action made me think I'd walked into an episode of The Perils of Pauline.

Yes, I really enjoyed The Wrong Girl. It's amazing how different a book can be from its predecessors and yet be so reminiscent of them. Blanche has chosen a completely different life from the rest of her family-- a life many of them would probably frown upon-- but she is a Tucker, and you can see this from first page to last. I'm looking forward to her next adventure with a great deal of anticipation.