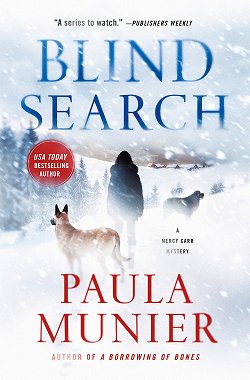 It's a bad time to be lost in the Green Mountains of Vermont: it's hunting season, the most beautiful and dangerous time of the year. It's not the first time nine-year-old Henry has been lost, but this time he's seen something terrible.

Former Army MP Mercy Carr and her retired bomb-sniffing dog Elvis have found Henry after discovering the body of a young woman killed with an arrow to the heart. Mercy thinks the woman was murdered. She also thinks Henry knows something about it. But the young autistic math genius isn't talking.

It soon becomes clear that there's a murderer hiding among the hunters in the forest, and it's up to Mercy and Elvis and their other crime-solving friends, game warden Troy Warner and search-and-rescue dog Susie Bear, to find the person before the death toll gets any higher--and to protect Henry at all cost.

A strong mystery combines with strong characters in Paula Munier's second Mercy & Elvis mystery set in the Vermont wilderness. Speaking of that wilderness, it comes to life under Munier's pen. I can feel the snowflakes on my face, smell the trees, and hear the crunch of the snow under my boots as I follow the characters along on their search for a killer.

For those of you who may worry about a child being endangered in Blind Search, I want you to know that I was wondering about that myself. Without giving too much away, I'll just say that you shouldn't worry too much about that. Munier has it covered, and covered well-- and she still keeps the story exciting.

She also has her characters covered well. Henry took center stage for me, and I really liked how both Mercy and the two dogs related to the young boy. Elvis and Susie Bear are stars, which should please dog lovers everywhere. Troy and Mercy have their own baggage to deal with which makes a relationship between them somewhat prickly, and if there's anything that didn't sit well with me in Blind Search, it's the appearance of a character from Troy's past. It's something that's been done so often that it's tired and worn out.

If you're in the mood for a fast-paced, exciting story with strong, likable characters and two marvelous dogs, it sounds to me like you should pick up a copy of Blind Search. As for me, I'm looking forward to my next visit to Vermont to see Mercy and Elvis.