The Lost Are the Last to Die by Larry D. Sweazy 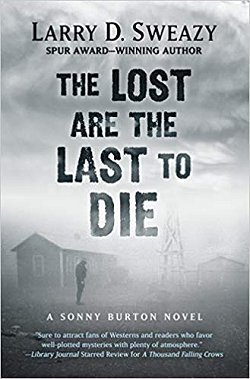 First Line: Sonny Burton downshifted the Model A Ford pickup truck and pulled it over to the side of the road.

Texas Ranger Sonny Burton retired after losing his arm in a shootout with Bonnie and Clyde, and you'd think they would leave him alone. But when Billy Bunson escapes from the prison in Huntsville, Texas, Sonny is asked to help capture him-- and his partner will be his son, Jesse.

No one knows Billy Bunson like Sonny Burton, and when Sonny learns that Billy escaped while taking a pregnant woman hostage, he knows there's more to this than meets the eye. For one thing, Billy has vowed revenge on Sonny and fully intends to carry it out because of the history between them. From his beginnings as a simple thief, Bunson has turned into a ruthless killer, so Sonny needs to proceed with caution.

The Lost Are the Last to Die unfolds over the twenty-five years that ex-Texas Ranger Sonny Burton and escaped convict Billy Bunson have known each other. In timelines varying from 1911 to 1934, readers are told these two men's stories from both points of view, and it's all about perspective. Sweazy does an excellent job of portraying both men. We see Burton's unhappy home life, his World War I service, and his slightly uneven career in the Texas Rangers. And throughout this time, Billy pops in and out. Billy, whose mother is a prostitute and his grandmother a brothel owner. Billy, a little boy who travels with the women from place to place when business gets too slow. Billy, who's trained as a thief and whose best friend and teacher is a former slave named Jim Rome. And throughout his life, there's the shadow of Sonny Burton, a laconic Texas Ranger who always seems able to outthink him and who always seems to expect more from Billy than Billy wants to give-- and that makes Billy angry.

As I read this engrossing story, two things stood out. One, a scene where Sonny comes across a rabbit cull. He sees a little four- or five-year-old boy covered in blood and screaming for his mother, and as he drives his Model A Ford pickup truck down the dirt road, he thinks about that little boy, wondering what he would remember of that day and what sort of man he would become. This scene not only brings to life a common occurrence during the Dust Bowl (rabbit culls), but it also tells us a lot about Sonny himself. The second thing? In many ways, the character who stood out the most (and who didn't get that much "screen time") was Jim Rome. In a few words, Sweazy manages to bring this man to life and make readers ponder all the things he had to endure. This is some marvelous storytelling.

This is the second Sonny Burton mystery I've read and enjoyed. The time period, the plots, and the characters all capture my imagination, so it should be no surprise to anyone when I say that I hope Sonny makes a third appearance. I really hope he's not done telling us his story.