Lethal Pursuit by Will Thomas 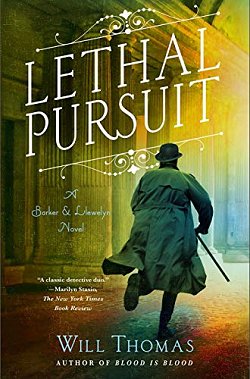 First Line: The express from Dover was still coming to a stop when Hillary Drummond leapt onto the platform.

When one of the Foreign Office's best agents is murdered at Charing Cross Station in London, the Prime Minister enlists the aid of private enquiry agents Cyrus Barker and Thomas Llewelyn to safeguard a priceless document and turn it over to agents of the Vatican in Calais. The document is desperately wanted by the German government, and with a cold war brewing between Germany and England, it's in England's best interests to return it to its original owners-- the Vatican.

But Germany isn't the only group wanting to get its hands on the document. Secret societies, government assassins, political groups, and all sorts of shadowy figures are all making their way to the offices of Barker and Llewelyn, and Barker has the most unbelievable way of dealing with them all. Why? Because he thinks the death of the Foreign Office agent is more important than a first-century gospel, that's why. That's Cyrus Barker for you...

I've been a fan of Will Thomas' Barker & Llewelyn mysteries from the very first book, Some Danger Involved. I always learn something about Victorian London, the slalom course of action and mystery is often hair-raising and always enjoyable to read, and the characters are just plain fun.

While Cyrus Barker is a larger-than-life character, young Thomas Llewelyn is our narrator. He's learned a lot over the years he's been with Barker, and I love his tongue-in-cheek sense of humor. Thomas can always make me laugh.

The story in Lethal Pursuit is a corker, one of the best howdunits I've read in a long time. You see, when the Prime Minister wants Barker to take the mysterious document to Calais, Barker will not agree until he is given the leeway to do the job as he sees fit. The Prime Minister doesn't see any particular problem in allowing this-- no one disobeys him after all-- but longtime readers of the series know that a wild ride is about to begin. And what a ride! With so many different groups after the document, Barker has to be a master of misdirection, and that's exactly what he turns out to be.

Now I'm left wondering what on earth these two private enquiry agents will get up to in the next book in this series. I can't wait!