We Band of Angels by Elizabeth M. Norman 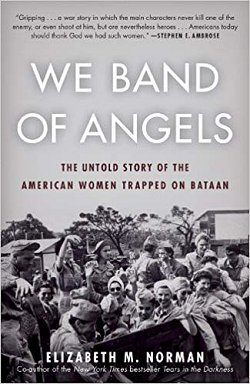 First Lines from Preface: I cannot say where or when, exactly, this story really began. Sometimes I think it started with my mother.

In the fall of 1941, the Philippines was a paradise for the American Army and Navy nurses stationed there. War was only a distant rumor. The shifts were easy, walks on the beach were there for the taking, and dinner and dancing under the stars commonplace. On December 8, all that changed as the Japanese bombed the American bases on Luzon. Now, this paradise was hell. Caught in the battle, the nurses set up field hospitals in the jungles of Bataan and the tunnels of Corregidor where they tended to an endless stream of horribly wounded men while enduring the nonstop attempts of the Japanese to overrun them.

But it got even worse when Bataan and Corregidor fell. The nurses were herded into internment camps where they spent the next three years doing everything they could to help themselves and the other internees to survive fear, brutality, and starvation. Once liberated, they returned to an America that declared them heroes yet later refused to honor their leaders with the medals they deserved.

Norman takes readers through the nurses' lives before, during, and after World War II. Many of them told her that the key to their survival was to keep busy. It didn't matter what they did as long as they did something. This book is packed with information, but ultimately, I was never fully engaged in Norman's story. I think it can be chalked up to the fact that I've been spoiled with the non-fiction that I prefer to read: detailed histories that still manage to read like the best fiction. So... consider my very subjective opinion when you decide whether or not to read We Band of Angels. It not only covers an important part of history (and covers it well), but it also covers a very important part of women's history. I'm very glad I read it.