The Mechanical Devil by Kate Ellis 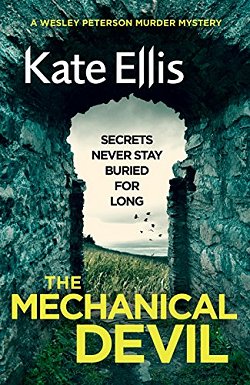 First Line: The car was red, the colour of fresh blood.

In the process of digging in a Dartmoor field, archaeologist Neil Watson's team finds a long-buried mechanical figure in an iron box. He's determined to learn the truth about the figure, but when he tries to share his discovery with his friend Detective Inspector Wesley Peterson, he finds Wesley up to his eyes in a double homicide case. A man and a woman were killed execution-style in the same field, and as far as Wesley's team can find out, the two victims have no connection to each other.

This case is difficult enough, but the daughter of a local bigwig has gone missing, and his superiors are insisting that the girl comes first-- which isn't difficult to agree with when they learn that the girl has a connection to one of the murder victims.

And when it rains, it pours. Wesley's personal life is thrown upside-down when a woman he helped on a previous investigation finds herself the victim of a vicious campaign of terror. Is there a link between the double murder and the accidental death of a young history student twenty years ago? And what, exactly, is the mechanical devil?

This is a long-running series that I have loved since the first book. Granted, a few books aren't as strong as the rest, but that's to be expected. I always learn something when I read a Wesley Peterson mystery. This time it was Neil Watson's search for medieval graffiti and early automatons. Scattered throughout the book are excerpts from the unfinished doctoral thesis of a history student who died twenty years ago. As always, these excerpts shed light on one of the mysteries. And while I'm thinking about it, make sure you read the Author's Note in the back of the book, especially if you're the type of reader who likes to know how writers come up with the ideas for their books.

There is some excellent misdirection in the main mystery, but I felt that there might have been too many subplots, in particular, the one involving Belinda Crillow, the woman Wesley helped in a previous investigation. It was all too easy to deduce what was going on, and the only thing it seemed to be good for was to show how overloaded Wesley was and how many demands there were on his time.

I'm almost caught up with this series, which makes me happy. I'm not sure how I got behind! There's been a long-running subplot about one of Wesley's team and her wedding that feels as if the planning and preparation have been ongoing for at least a decade. But on the whole, I love the cast of characters in this series. Otherwise, why would I have lasted through twenty-two books?

If you're thinking about trying this series but are daunted by its length, I think you can jump in with this book (or the previous two which are excellent) without feeling lost. But if you're a character-driven series reader who loves a bit of history thrown in with your mysteries, this is a wonderful series to read. Go for it!