Death on the High Lonesome by Frank Hayes 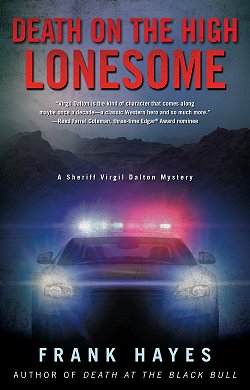 First Line: Jimmy Tillman hardly ever went on the interstate.

Sheriff Virgil Dalton knows that his sleepy hometown is beginning to reflect the times, and that's not always a good thing. But being aware of the changes doesn't take the shock or sting out of one of his deputies almost being killed by a woman's body falling from the highway overpass-- a woman the medical examiner believes had been running for her life.

Longtime resident Velma Thompson reports her husband Charlie missing, and no one thinks much of it. A tough old rancher, Charlie was known to saddle up a horse and ride over his land for several days at a time. But when Velma's body is found sitting on her front porch, Virgil knows something is seriously wrong and that Charlie must be found. Virgil saddles up and heads to the High Lonesome, the rugged mountains above the Thompsons' ranch house. On a windswept mesa, he's going to find the first clues that point to a murderer who's determined to get his way, no matter how many people he has to kill.

After the first book in this series (Death at the Black Bull) compared so favorably to both Walt Longmire and Harry Bosch, I was really looking forward to Death on the High Lonesome. What I read makes me look forward now to the third book.

If there's any weakness to be found here, it's in the mystery. For one thing, it's very slow to get moving, but that may be due to the second thing: it's easy to guess the identity of the killer. Those two things may be dealbreakers for some, but not for me because there's a lot more to Death on the High Lonesome than the mystery.

The dry landscape and mountains of the desert Southwest shine here and draw me right into the story. Frank Hayes has a sparse, matter of fact prose that can still lend itself easily to poetry especially when Virgil saddles up and heads into the arroyos and mesas of the high lonesome. (I don't know about you, but I've always found the phrase "high lonesome" to be incredibly evocative.) Death on the High Lonesome can also be called an elegy to the life of a rancher, a life that's fast disappearing.

The strong backbone of this series is its ensemble cast that is reminiscent of the cast of Craig Johnson's Longmire books. Virginia, a young woman who's having a profound impact on Virgil's personal life. The old Mexican, Cesar, who's Virgil's ranch foreman and second father. Virgil's Apache grandfather. Then there are the people Virgil works with: Rosie the dispatcher, Dif the old part-timer, young Jimmy, and Ark the medical examiner. Every member of this cast cares about the others, and they're pretty good about adding some comic relief from time to time.

If you like reading mysteries with strong characters and evocative settings, I urge you to try Frank Hayes' Virgil Dalton books. There is character development, so I recommend beginning with Death at the Black Bull. And now I'm looking forward to book three, Shattered Dreams.