Death at the Black Bull by Frank Hayes 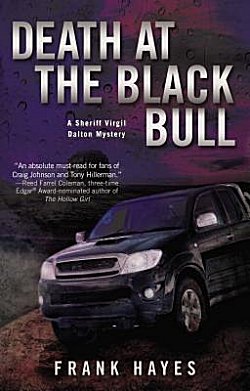 First Line: He sat on the tail of the old pickup, watching the dark as it crowded the western sky.

Nobody takes much notice when Buddy Hinton disappears. After all, he's just a good ole boy and probably went down to Mexico to have a little fun. But when Sheriff Virgil Dalton finds Buddy's body floating in one of his stock tanks, he knows this means Buddy really upset someone.

Townspeople like to think of Hayward as one of those dusty little towns where the old yellow dog sleeps in the middle of Main Street, but it hasn't been like that for a long time. It's going to take Virgil and his deputy, Jimmy, time to retrace the dead man's steps-- and they're going to have to remain one step ahead of a murderer who has no qualms about killing more people to keep a secret.

Craig Johnson's Walt Longmire is my favorite sheriff, so when I come across a new one, I have to see how he measures up to Walt. I think Walt and Virgil would get along just fine. Dalton calls himself a half-breed, he considers an old Mexican man who is the foreman on his ranch to be his second father, and his grandfather lives in a trailer way out in the back of beyond. He doesn't miss much. He doesn't say much. And he certainly gets the job done. He knows his town isn't the "old yellow dog" town anymore, and he doesn't back down when it comes to demanding the city fathers chase the moths out of their wallets to get him the help he needs.

Most importantly, the thing that won me over was how Dalton treats the people around him. He treats them with respect, and he doesn't ignore people everyone else has decided are "throwaways." A case in point is his deputy, Jimmy. Jimmy had an extremely abusive childhood, and most folks in town think he's not worth much... in fact he may even be a bit slow. But Virgil knows the life Jimmy has led, and he's spent time with the young man, listened to him, talked with him, and taught him things he needs to know. As a result, Jimmy could very well turn out to be an exemplary lawman. Dalton is in the Harry Bosch camp: everyone counts, or no one counts, and I like that.

Yes, as I read Death at the Black Bull, I fell for Virgil Dalton. I also fell for Frank Hayes' writing. The descriptions of the desert setting are evocative, and he's got a knack for making readers care about his characters. I spent most of the book wondering if the bad guy(s) would find Dalton's grandfather, if something would happen to the sheriff's beloved horse or to the old Mexican Cesar or to Jimmy. I seldom ever spend so much time feeling nervous while I'm reading a book.  But it was a good nervous. Know what I mean?

There's only one thing that made me roll my eyes, but I can't really say anything about it without giving away major plot points. I'll just let you wonder about it. I expected Death at the Black Bull to be good, but I was very pleasantly surprised by how good it really is. Now I have to get my hands on a copy of the next book in the series, Death on the High Lonesome. I'm looking forward to my next date with Virgil Dalton.