What Rose Forgot by Nevada Barr 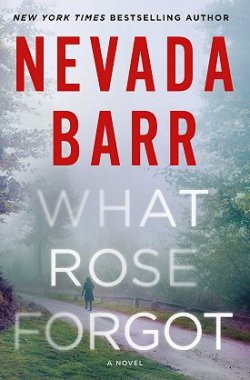 Rose Dennis wakes up in a gaping hospital gown standing out in a strange park. Her brain in a fog, she's hustled back to the Alzheimer's Unit in a nearby nursing home. Rose doesn't think she belongs there, but her brain is so jumbled that she is concerned. But she's even more concerned when she overhears a conversation in which she's not expected to make it through the week. That does it. Rose stops taking her medications then stages her escape.

But she's got a major hurdle to jump: how does she convince anyone that she's not demented? After all, her relatives were the ones who committed her, the legal papers are drawn up and on file, and the authorities are on the side of the nursing home. Even Rose herself isn't completely convinced that she sounds totally sane. But all doubts are erased when a would-be killer shows up in her house in the middle of the night. Now Rose knows that someone wants to get rid of her.

With the help of her computer hacker/recluse sister Marion, her thirteen-year-old granddaughter Mel and Mel's friend Royal, Rose begins to fight back. She wants her life back... but someone out there has other plans.

It's been too long since I had the pleasure of reading a Nevada Barr novel, and as I devoured the story of Rose Dennis, I cheered, I laughed, and after its conclusion, I closed the book with a huge smile on my face. What fun!

What Rose Forgot reminds me of Barr's Anna Pigeon mystery, Destroyer Angel, and for me, that is a very good thing. This newest story from Barr has a lot to say about ageism at both ends of the spectrum. Many of us are not very kind (or accurate) in our assessments of the old or the young, and Barr shatters the stereotypes of both age groups with ease and a maniacal gleam in her eye.

What Rose Forgot is laugh-out-loud funny in many places, and-- yes-- the action is often over the top, but check reality at the door and buckle up your seat belt. Nevada Barr has written a ripping good yarn that is a delight to read.