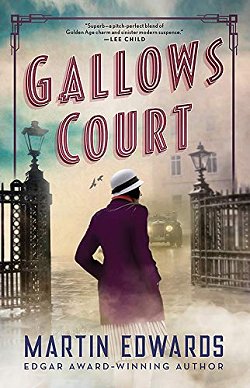 A series of violent deaths-- so violent that the details are too awful to print-- have hit the fogbound streets of 1930 London. Rachel Savernake, the daughter of a notorious hanging judge, solves the Chorus Girl Murder and now she's on the trail of another killer.

Young newspaperman Jacob Flint is looking for the scoop that will make his name, and he's convinced that there's more to Miss Savernake's amateur sleuthing than meets the eye. (He's not the only one.)

There's only one problem. The more he tries to discover the identity of a killer as well as the truth about Miss Savernake, the closer he comes to losing his own life.

Martin Edwards is one of my favorite authors, so I was looking forward to this first-in-a-new-series with a great deal of anticipation. The setting of Gallows Court is pitch-perfect. The streets of London in the dark and the fog are suitably creepy, and Edwards describes a world in the grips of the Depression very well. In addition, if you like creepy houses on remote islands in the Irish Sea, you should love Gaunt Island.

The story has intermittent chapters from a young girl's journal written in 1919 that give us some backstory on the mysterious Rachel Savernake, and those chapters really make a reader wonder what type of person she is. When another character says, "Rachel Savernake is the most dangerous woman in England," you feel as though you must agree.

The young newspaperman, Jacob Flint, is a callow youth. He's really not been out in the cold cruel world long enough to knock some sense into him, so he's completely unprepared when people he interviews are killed and thugs jump out of dark alleys to rough him up. He does have a knack for investigative journalism and he certainly doesn't know when to quit, so he does have plenty of potential.

Gallows Court is a mystery in which nothing and no one should be taken at face value. Little is as it appears to be, and this is exactly the sort of mystery that can be so much fun to solve. And I did, indeed, solve most of the mystery. The problem is, I am not a fan of plots in which one of the characters has to spend a lot of time explaining what really happened to everyone else, and this happens not once, but twice.

With the exception of those two long sections of exposition and the fact that I never did warm up to Jacob Flint, I give everything else in Gallows Court high marks. If you're the type of reader who doesn't mind exposition and has more patience for the callowness of youth, this could be your perfect cup of tea.