The Bone Fire by S.D. Sykes 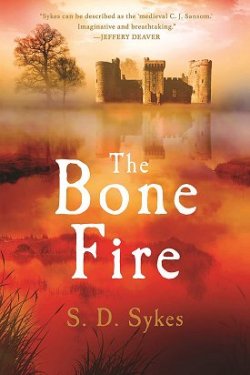 First Line: December 1361. To the finder of this letter, If you are reading this, then I am dead.

When the Black Death resurfaces in England in 1361, Oswald de Lacy knows that the best thing to do is to find a safe place for him and his family to hide. The chosen place is the island fortress of Eden, home to de Lacy's eccentric friend, Godfrey, who invited them to come and wait out the plague during the long winter to come.

Once De Lacy, his wife,  young son, and mother arrive at the castle, the portcullis is lowered. No one is to enter or leave until the spring. But the de Lacys scarcely have time to settle in when a murder occurs and proves that the castle is not the place of security everyone had thought.

The inhabitants of Eden Castle aren't safe within its walls, but they cannot leave because the plague is decimating the countryside. The only thing Oswald can do is to attempt to solve the murder before the killer strikes again.

Sinister Eden Castle is the worst place to wait out the plague, and that choice of "safe haven" makes S.D. Sykes's The Bone Fire her best Somershill Manor mystery yet. Plague outside the walls, a killer on the loose within. I've always had a soft spot in my heart for locked room mysteries, and The Bone Fire delivers a multi-layered mystery that's fun to solve.

I've been a fan of this series from the first book, Plague Land, and it was interesting for me to witness how characters who had survived the first plague in 1348 behaved when it returned in 1361. Interesting facts about the era in which the book is set are seamlessly woven into the story. Oswald's friend Godfrey has prepared for a long siege, having his chosen guests bring in food and other necessities, while he carries out his own plans: the few servants in the castle are all female because females eat less, food storage is given top priority, and even entertainment is taken care of by hiring a fool.

The mystery is intricate, and you'll be surprised at just how much scuttling and hiding a few characters can do in a relatively small castle. Buttonholing each character and trying to find out his true agenda is quite a job, and as Oswald tries to do just this, he realizes his true task: "I was not a hero or a pariah. I was a nemesis." I would imagine I'm not the only person who immediately thinks of Miss Marple whenever I see the word nemesis, and Oswald definitely needs all of that woman's skills of deduction.

The setting is excellent, and so is the mystery, but the characters truly drive the story. Oswald has matured so much from the first book in the series. He's doing much less investigative stumbling around in The Bone Fire. His marriage is an interesting one, too. I still can't stand Oswald's mother, but the purpose of the supremely frustrating woman makes much more sense now. (Shame on me, but I'm still hoping that the next round of plague does her in.) The secondary cast of characters reads like something out of Chaucer: a lord and his lady, a knight, a religious extremist, a court jester, a drunk, a couple of traveling craftsmen-- and they all have an important place in this story.

If you enjoy historical mysteries, I urge you to read this series. Although best read in order, you can read The Bone Fire as a standalone. (But I hope you don't.)