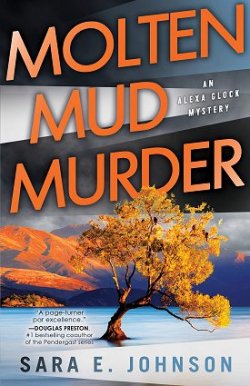 With her job completed, forensics expert Alexa Glock faces leaving New Zealand and returning to North Carolina. She doesn't want to. When a body is found partially submerged in a molten mud pot in one of Rotorua's famous geothermal wonderlands, Alexa sees it as an opportunity to prolong her stay in the country.

Detective Inspector Bruce Horne reluctantly adds Alexa to the team investigating the murder. They discover that the victim had trespassed on an island sacred to the Maori, but Alexa doesn't believe in ancient spirits returning to exact revenge. She thinks the real threat is something much closer to home and sets out to prove it.

Sara E. Johnson's first Alexa Glock mystery has a superb setting. New Zealand is visually stunning to begin with, and Johnson does a fantastic job of weaving Maori culture and Kiwi slang into her story. In fact, the setting was my favorite part of the book.

However, other parts of Molten Mud Murder didn't match the strength of the setting. Take the main character's name, for instance. Alexa is a name that seems to be the flavor of the month lately. I can't turn around without bumping into that name either on humans or on technology. Her last name, Glock, led to several instances of the eye-rolling reply, "Like the gun?" This is the first time in a long time that I've been irked by a character's name, but I found Alexa annoying for more reasons than that. She is a very skittish woman, and although readers are told that she suffered trauma in her past, it didn't really explain why she is so jumpy. Alexa must also suffer from Biological Clock Syndrome because she spends way too much time daydreaming about the handsome Detective Inspector Horne.

The mystery was percolating quite well, and I was having a difficult time trying to identify the killer when, toward the end of the book, a character is introduced, and it was like turning a searchlight directly into my eyes. If the character had been introduced with some subtlety earlier in the book, I probably would not have been able to figure it all out.

Even though the mystery and the main character had the tendency to annoy me, I still enjoyed Molten Mud Murder for its superb setting. So much so that I'm tempted to read the next book in the series.