The Whisperer by Karin Fossum 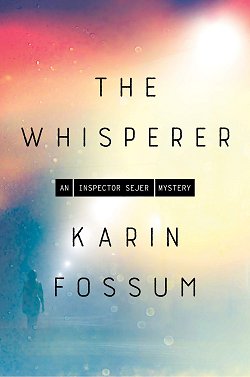 First Line: She wasn't beautiful, and she was of course perfectly aware of it.

Ragna Riegel is a woman most people don't even notice, but she's used to it. Unable to speak above a whisper, she insists on a life of order and routines, but when she finds a threatening letter in her mailbox, everything changes. There are more letters spaced out over time, and Ragna's life begins to spiral into a nightmare. Threatened by an unknown enemy, paranoid, unable to sleep, and isolated from everyone else, Ragna's nightmare ends in a death ... but she is the killer, not the victim.

When Inspector Konrad Sejer begins his interrogation of Ragna Riegel, he's certain it's an open-and-shut case. But is it?

Karin Fossum's The Whisperer is a fantastic character study that allows Inspector Sejer to do what he does best: listen. Ragna Riegel is a tough nut to crack, but the presence of Sejer's dog, Frank, helps lower some of the woman's defenses as the book alternates between the voices of Ragna and the inspector.

It's really not crystal clear through most of the book exactly why Ragna is in jail, and while these two characters talk, the reader is asking himself questions. What did she do? Prison for life? Murder? Could she really kill anyone? The more I read, the more I felt as though I were falling down the rabbit hole with Ragna, and I think a little of her paranoia rubbed off on me, which is a mark of some excellent storytelling.

The only thing I have to complain about is that the story drags badly at about the half- to the three-quarters mark. The lag time may not bother anyone else and that's fine, but if you're the type of reader who likes everything to be resolved by book's end, you're probably not going to like The Whisperer because it has a twist at the very end that sends your mind off to the races again-- and you're left wondering. You're left with questions, not closure.

I loved that twist at the end. In fact, I think I was expecting it. Karin Fossum had me thinking about the madness that can be found in everyday life, and she reminded me to question assumptions-- and that is a valuable reminder.