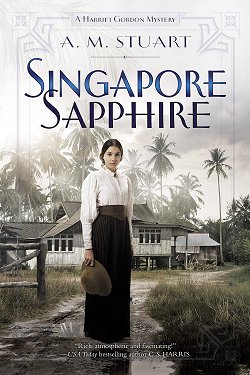 First Line: Sir Oswald Newbold picked up his pencil and circled the small advertisement on the second page of the Straits Times, folded the paper and set it down beside his placemat.

In 1910, Singapore is at the height of British colonial rule. It is the place where Harriet Gordon has come for a fresh start. Living with her brother, who is a reverend and headmaster of a boys' school, she's unpaid help, so in order to gain a little financial independence, Harriet advertises her services as a personal secretary. It's unfortunate that she finds her first client with a knife in his throat, dead on the floor of his study.

When Inspector Robert Curran is put in charge of the investigation, he thinks Sir Oswald Newbold's murder was personal, something to do with his being an explorer, a mining magnate, and the president of the exclusive Explorers and Geographers Club. He quickly learns that Helen's strong sense of duty and keen eye for detail make her a valuable witness. Her mysterious past and distrust of the police pique his interest.

When another body is discovered in a canal, Harriet feels compelled to help with the case, and she and Curran soon find themselves chasing a ruthless cabal that thinks nothing of killing to protect its secrets.

A.M. Stuart's setting of Singapore in 1910 felt so real that, as I read, I wondered how on earth women could survive there back in the days of acres of petticoats, corsets, and no air conditioning. The pace of Singapore Sapphire did drag a bit from time to time, mostly due to its being the first book in a series and the need to set up both characters and story, but there is a strong mystery that kept me guessing. The one thing I didn't keep guessing about-- the single clue about the murderous group of bad guys-- is something the characters in the book couldn't seem to get straight, so I have to admit that I did get exasperated with them.

The two leads, Harriet and Curran, are strong, interesting characters that can certainly carry a series on their shoulders, but I did wonder about Harriet even after her mysterious past was laid bare. She seemed to cry at the drop of a hat, and she seemed to get ravenously hungry so often that I thought she may be hypoglycemic.

Yes, Singapore Sapphire is a strong, solid start to a new historical mystery series, but I'm not sure that I will continue with it. As good as the two lead characters are, they really didn't "grab" me and make me want to read more. Of course, your mileage will certainly vary!