Murder on Safari by Elspeth Huxley 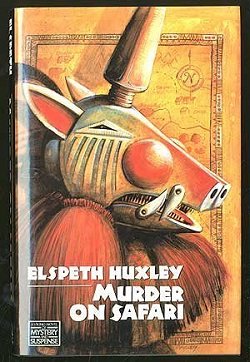 First Line: Vachell looked across the desk at his visitor with a slight sensation of surprise.

Going on safari in 1930s Kenya is something every wealthy person wants to do, and there are companies that cater to their every possible whim: electric lights in the tents, champagne, caviar, carpets... the list is endless. Lady Baradale has hired one such company, and she's also insisted on bringing along her priceless collection of jewelry. A certain recipe for disaster, isn't it?

Sure enough, the jewels are stolen, and Lady Baradale insists that Superintendent Vachell come out to find the thieves.

After watching The Flame Trees of Thika on television and Out of Africa in the theater, I became fascinated with Kenya during the time period of 1900-1940. There were some highly interesting people there doing all sorts of things, and I read one book after another about them. One of those interesting people was the author of The Flame Trees of Thika, Elspeth Huxley. The memoir of her childhood in Africa is excellent, so it didn't come as any surprise when I enjoyed Murder on Safari so much. The woman knew how to write.

The setting is absolutely superb. I felt as though I were on safari with the cast of characters, and it was a treat to be on such a swanky one. In addition, it's through this vibrant setting that Huxley often shares her opinions of big game hunting, poaching, and Britain's behavior as a colonial power.

Vachell, formerly of the Royal Canadian Mounted Police, is new to the country and his position as superintendent, and he's not in camp long before it's been proven to him that he's among a bunch of rich, entitled twits. Huxley's sly sense of humor raises her head with Vachell. Lady Baradale insists that he would do a much better job if everyone else didn't know he was a policeman, so he's persuaded to go undercover as a great white hunter. It's an ill-fitting disguise and provides some laughs along the way.

The mystery in Murder on Safari kept me guessing as well as providing a few chills and thrills. There's nothing like trying to search for clues in a tent "...in total dark, knowing [you're] not alone." I normally don't care for crime fiction written in the 1920s and 30s, but Huxley's mystery is certainly an exception to the rule. I'll be looking for more.