Killing with Confetti by Peter Lovesey 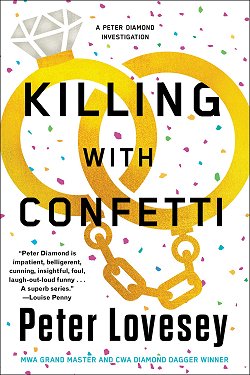 First Line: The two short words Warren doesn't wish to hear: "It's on."

The course of true love never did run smooth, especially when the son of a high-ranking police officer falls in love with the daughter of a high-ranking criminal. But the young couple insists, and the bride is going to have her white wedding in the cathedral with a reception in the Roman Baths afterward.

This brings on a whole new round of headaches. The father of the bride will walk his daughter down the aisle, and there are many people who want him dead. This means that he needs a bodyguard, and it's Peter Diamond's rotten luck that he's chosen to be that man.

Now Diamond's got to figure out where the assassins are going to take their best shots at eliminating this member of the wedding-- even though it's the last thing he wants to do.

Killing With Confetti is vintage Lovesey. The man had to be enjoying himself the entire time he was writing the book. In this eighteenth outing for the indefatigable Peter Diamond, red herrings are the main course, and Lovesey is the master chef. The story grabbed me from the start, but once I got close to the end, those twists and turns kept coming, and I was delighted.

From the grim necessities of the very real dilemma this marriage was for the police officer's family to scouting out the most likely locations for an ambush, the story would pause momentarily for much-needed humor. (Diamond on the firing range made me laugh.)

Two characters, in particular, came to life for me: Magda Lyle and her West Highland terrier, Blanche. Even though I understood why I still wish there'd been more of those two in the book. I also found myself pondering the behavior of the mother of the groom. Yes, engaging story, gales of laughter, food for thought... welcome to Peter Lovesey's neighborhood; it's a wonderful place to visit. And if you're concerned about diving into an eighteen-book series, don't be. I joined in at roughly the halfway point, and I haven't felt confused once. Join me and all the rest of the Peter Diamond fans!