City of Masks by S.D. Sykes 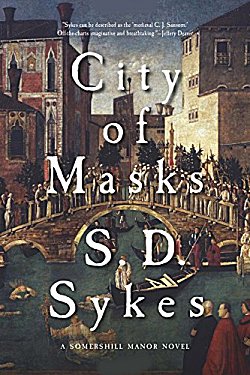 First Line: It was the carnival of Giovedì Grasso, the last Thursday before the Lent of 1358, and I had spent the afternoon in the Piazza San Marco, watching the many spectacles of the day.

It's 1358. Venice's war with Hungary means that Oswald de Lacy, Lord Somershill, and his mother are delayed in the city waiting for a ship to the Holy Land. Staying with an English merchant, Oswald immerses himself as much as possible with the delights of Venice, but no matter how he tries the thing he's running from--some mysterious something that happened in England-- refuses to stop following him.

When he finds a dead man on the street, he is dragged into a murder investigation that draws him deep into the intrigues and paranoia of this mysterious city. Everyone is watching or following someone else. No one in Venice is who they appear to be, and Oswald's investigation could very easily be the end of him, too. There are plenty of dungeons in Venice, you see...

I really enjoy S. D. Sykes' historical series. Oswald is a younger son who was destined for a life in the monastery, but when the Black Death killed his father and older brothers, he found himself Lord of Somershill Manor. Life in a religious order doesn't necessarily condition a person for running an estate, so Oswald has been on a learning curve that's interesting to watch. In City of Masks, ten years have passed, and while Oswald tries to conduct an investigation, readers slowly learn what happened in England to chase him away from his home.

Oswald is an interesting blend of intelligence and naivete. Growing up in the monastery has made him wise in several things ordinary people don't know, yet woefully ignorant in things those same ordinary people take for granted. His mother is a woman of her times who also manages to be thoroughly obnoxious with very little effort, but Sykes gives her some backstory so she's not just a two-dimensional stereotype.

The mystery in City of Masks kept me guessing, but as much as I enjoyed the story and the characters, it was Venice that was the shining star for me. Sykes brought this dazzling city to life in all its glory and filth-- and traveling to those outlying islands wasn't a picnic either. As I read, I felt as though I were in Venice with Oswald in 1358, and that's the best sort of armchair travel a reader can ask for.

If you enjoy historical mysteries with a vivid sense of place, strong stories, and interesting characters, I recommend S.D. Syke's Somershill Manor mysteries. To understand Oswald as much as possible, it would be a good idea to start at the beginning with Plague Land and The Butcher Bird but you could read City of Masks without feeling lost at all. It's up to you!