An Elderly Lady Is Up to No Good by Helene Tursten 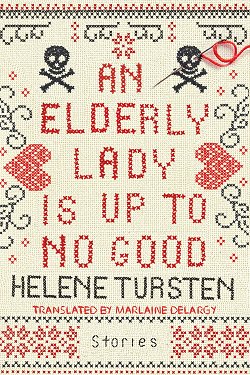 First Line: The shrill sound of the doorbell sliced through the silence.

Eighty-nine-year-old Maud keeps herself to herself. To the other tenants in the apartment building, they see an old lady who lives in an apartment that's much too big for her, and-- worst of all-- she doesn't pay a penny in rent! What those neighbors don't know would fill an encyclopedia.

Just as Maud entered university at the age of eighteen, her beloved father died. Her mother couldn't cope with the shame of finding out there was no money left, rapidly faded away, and died. Fortunately, a real estate deal was done that gave Maud and her sister their apartment rent-free for as long as they were alive.

For the next few decades, Maud was burdened with the care of an emotionally fragile sister who should've been put in assisted living but refused because, well, that was what Maud was for. Finally, when she was in her sixties, Maud was free to live her life as she chose. Perhaps she should be forgiven for wanting to stay where she'd lived her entire life and for all the traveling she does. Hasn't she paid her dues? (Take that, nosy neighbors!)

All this and more is what you learn as you read Helene Tursten's short story collection, An Elderly Lady Is Up to No Good. I've been asked before what my "guilty pleasure" books are, and I've always responded that I never feel guilty about the books that I read. Life's too short and all that. But maybe... just maybe... I should call Maud a guilty pleasure character. In these stories, Maud runs into several folks who take one look at her and think that she's going to be easy to cheat. After all, she's a little old lady who uses a walker to get to the shops. Her mind's got to be going, right? Think again!

In this collection, Maud has to outwit someone trying to take her apartment away from her and someone else who's trying to steal her antiques-- and she's not above a little murder to take care of these people either. It's a pleasure to watch this old lady take care of her youngers and supposedly betters, and lest you get the idea that "it's all about Maud," that's not true. She's also willing to help out others she comes in contact with, although she certainly doesn't seek them out.

When I read one story that was written from an outsider's point of view, I thought to myself, "Why couldn't we get this story from Maud?" The very next story told us the events from her perspective. Tursten read my mind. Tursten also had fun having her two other characters, Detective Inspectors Irene Huss and Embla Nyström test their wits against Maud. An Elderly Lady Is Up to No Good is a light, fun read that proves something I've always known: never underestimate the elderly.