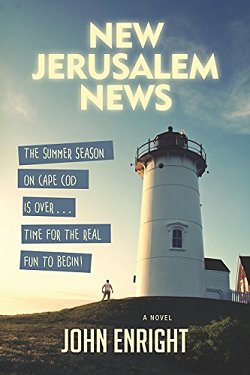 First Line: It was Brenda's idea.

Life as a professional houseguest is just what Dominick likes. Following the sun and the idle rich from resort to resort, he can live free and easy, no entanglements, no relationships, nothing and nobody to tie him down. But this all changes when he decides to spend the winter on an island off the coast of Cape Cod.

Despite his best efforts to remain detached, Dominick finds himself becoming involved in the lives of his elderly hosts, Atticus and Lydia, and their group of eccentric friends and oddball locals. The more involved he becomes, the more he begins to rethink his own life-- especially when he becomes a suspected terrorist.

I first became hooked on John Enright's writing when I read his four-book Jungle Beat mystery series set in American Samoa, so when I stumbled across New Jerusalem News, I didn't hesitate to buy it. At first, I wasn't sure I'd like the story of a professional houseguest because, to me, that's synonymous with "freeloader," but Dominick isn't a freeloader. The illegitimate son of a rich man, he has an independent income and can pay his own way, but the circumstances of his birth seem to have cast him in the role of the outsider looking in.

During the summer, he and two friends enjoyed themselves by Dominick taking on the persona of "Lord Witherspoon" so they could have all the local realtors take them on tours of the mansions that were for sale. It's only when he decides to stay during the offseason that Dominick's life begins to change. An elderly couple, Atticus and Lydia, have a lot to do with that. Atticus and Lydia have two grown daughters, and in an attempt to make everything simpler when they die, they signed over everything to them. One of the daughters lives in London and ignores them. The other lives in Boston and wants to shuffle her parents off to a condo in Florida so she can sell the property and make a fortune.

New Jerusalem News may seem a bit vague in its direction, but so is Dominick. This is a book to savor for its poetic descriptions of land and sea and for its marvelous character studies. Dominick wants to live a life of non-involvement, a life in which he's merely an observer, but reality has fun with him. He can't abandon Atticus and Lydia, and he can't help making friends with Emma and John Starks, two of the locals. And he certainly can't help getting involved when the FBI and Department of Homeland Security decide he's a terrorist. This terrorist plotline has some pointed things to say about those two government agencies, and it really pulls in the reader. Enright had me genuinely concerned about the fate of his characters.

There's another book in the Dominick Chronicles: Some People Talk With God. I look forward to reading it. John Enright has a poet's way with words, and he certainly knows how to tell a story. I'm looking forward to seeing what Dominick does next.