Deep Past by Eugene Linden 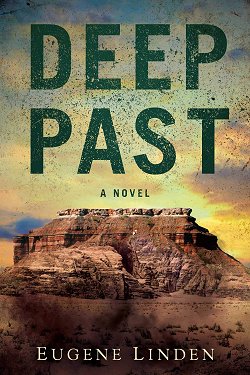 First Line: There are places on the planet whose scale reminds us that we are but a crushed bug on the windshield of time.

Anthropologist Claire Knowland has replaced the leader of a dig in Kazakhstan that's really going nowhere, which is fortuitous when a stranger turns up at the site with a bizarre find from a remote section of the Kazakhstan Steppe. Initially skeptical, once she checks out the location of the find, she realizes that this could shake the very foundations of our understanding of evolution and intelligence.

The corrupt politics of Kazakhstan means that Claire has not only to gather open-minded and hard-working experts around her but also take reckless chances with the discovery. Ultimately, she finds herself fighting for the discovery, her reputation, and her life in an unstable area of the world filled with chaos and greed.

Eugene Linden draws on his investigations into what makes humans different from other species in creating Deep Past, a fast-paced story with a vivid setting. One thing that he makes crystal clear is all the plotting, schemes, and political machinations that are rife in that area of the world. Paleontology and archaeology buffs are also going to enjoy this book that gathers power and speed like a freight train.

I hadn't realized quite how difficult it is to get the scientific community to accept new thinking, so that's one thing that I'm grateful to Deep Past for. If it doesn't concern data that can be seen, touched, and turned into a statistic for a report, discoveries can be easily dismissed, which means that anything to do with animal intelligence gets very short shrift indeed.