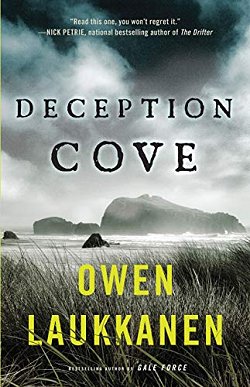 First Line: Certain moments came back to her, or maybe they never left.

Former U.S. Marine Jess Winslow reenters civilian life as a new widow, with a medical discharge for PTSD, a decrepit house, and a therapy dog named Lucy. The only thing Jess cares about is that pit bull mix who helps her cope with the crippling memories of her time in Afghanistan.

Mason Burke is recently released from prison after spending nearly half his life behind bars. He has one set of clothes, a wallet, and a photo of Lucy, the service dog he trained while incarcerated. When he learns that Lucy is in trouble, he heads for Deception Cove, Washington, where Lucy lives with Jess Winslow.

Almost from the moment he arrives, Mason finds himself in the middle of a standoff between Jess and the deputy county sheriff. The deputy is convinced that Jess has something he wants, and Jess is just as convinced that she doesn't know what he's talking about. But the deputy has Lucy, and Lucy will be destroyed if Jess doesn't do what he wants. The last thing Mason wants is to be dragged into something that could put him right back in jail. The last thing Jess wants is to trust a stranger. But neither of them can desert a friend, so they form an uneasy alliance in order to save the one good thing in both their lives: Lucy.

This fast-paced thriller drew me right in with its combination of strong characters, vivid setting, and addictive story. Laukkanen turns things a bit on their heads with his characters. It's still rather unusual for a woman to have PTSD in the crime fiction that I read, and it's extremely unusual for an ex-con to be one of the most decent human beings you'll ever meet. Not only that, Lucy isn't a typical heroic canine; she's got a personality all her own.

I tend to steer clear of books dealing with drugs, as Deception Cove does, because the violence quotient tends to be quite high; however, the author has a light hand with that so my overactive imagination was grateful. This is a case of characters, story, and setting combining for a very enjoyable read. I see that this is the first of what is being called the Neah Bay series, so I'm really looking forward to the next book.