The Island by Ragnar Jónasson 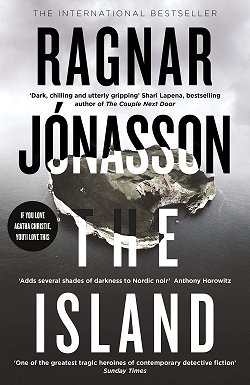 First Line: The babysitter was late.

In 1987, a romantic weekend in the Westfjords of Iceland goes wrong and has tragic consequences for the families involved. Ten years later, four friends decide to honor a deceased member of their group by spending a few days in an old hunting lodge on an island completely cut off from the outside world. They want to spend the time reconnecting, but things don't turn out as the friends had planned. One of them doesn't come back from that remote island alive, and Detective Inspector Hulda Hermannsdóttir is determined to find the truth.

The first book in the Hidden Iceland series, The Darkness, was the best book I read in 2018. I love how Jónasson begins this series with the end of the main character's career and has each successive book go further back in time. Reading about a life lived backward makes a reader more aware of the formation of personality traits that make Hulda the person she is.

In The Island, we learn more about Hulda's family background, which involves her making a long journey. I find her character almost hypnotic. Her life has been a series of heartbreaks-- from family losses to her fight against misogynistic males in the Icelandic police force. The case she's working on now could very well make her even more unpopular with her fellow police officers, but something like that ceased to bother her long ago. For Hulda, it's all about finding justice for those who have lost their lives and for those left behind. Hulda never says "the body" or "the victim." To her, a person's death does not strip them of their humanity. If she makes a mistake, she's angry-- for the victim, not herself. She knows that her mistakes can slow down not only justice but closure for grieving families, too.

The Island shows just how important doing the job right and bringing closure to families is, especially in Jónasson's depiction of what happened to Dagur's family in the years after the events in 1987.

Poised against the grimness of Hulda's investigation is the beauty of summer in Iceland. Reading Jónasson's books is a delight because of the knowledge readers gain about Iceland, its people, customs, and landscape-- and when you add to that the strength of the stories he tells and the mesmerizing characters he creates, you've got an unbeatable combination.

Jónasson has written two mystery series. If you're a newcomer to his work, you can't go wrong by reading either series. Chances are, once you've read one, you're going to want to read all of his books. They're fantastic.