Smoke and Ashes by Abir Mukherjee 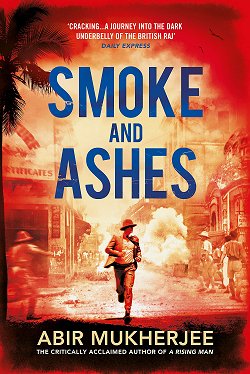 First Line: It's not unusual to find a corpse in a funeral parlour.

Feeding a drug addiction he's had since his service during World War I, Captain Sam Wyndham is in an opium den when it's raided by police. In a drug-addled haze, he stumbles across a dead body while making his escape. The very next morning, he's summoned to the scene of a murder and sees the same gruesome, ritualistic injuries as the ones on the body of the night before. There's a deranged killer on the loose, but Sam can't say anything about the body in the opium den because it could cost him his career. He's definitely going to need the help of his quick-witted Sergeant Surrender-Not Banerjee to solve the murders before someone else dies.

I have to be honest and say that it took me a long time to get into Smoke and Ashes, and it's got everything to do with me and nothing to do with the book because I really enjoy this series. The book starts out with Wyndham on a bender, and I have very little patience for fictional characters addicted to alcohol or drugs. Once I'd reminded myself over and over again that Mukherjee's A Necessary Evil made my Best Reads List of 2018, I picked the book up again and began to read. I'm glad I did.

Wyndham is no fool. He realizes that--with that first body he stumbled across in the opium den and the subsequent police raid-- he's been set up. Someone knows of his addiction, and that someone is using it against him. Wyndham gets himself together to wean himself off the drugs. Once he started avoiding opium dens, my enjoyment of the story increased, and so did the pace of the book.

The mystery and the characters are so strong, but I carried away two major things from reading Smoke and Ashes. One, Mukherjee is wonderful at depicting how unsettled India was in the 1920s-- and how good the British Raj was at making decisions that kept the Indians riled up. They brought about their own doom. The second thing that really impressed itself upon me was what an uncomfortable position Wyndham's Indian sergeant is in. No one in his family wanted him to join the Raj's police force, and many family members shun him. But Surrender-Not is as stubborn as the British mispronunciation of his given name. He is good at his job. He believes in his job. He also believes India should be free from British rule. Like I said, his position is not an easy one.

If you enjoy historical mysteries with strong stories, strong characters, and a setting so vivid that you're drawn right into the thick of things, you can't go wrong with Abir Mukherjee's Wyndham and Banerjee series. I also find that these books make excellent companion pieces to Sujata Massey's Perveen Mistry historical series that take place during the same time frame, so keep those in mind, too!