Thread on Arrival by Lea Wait 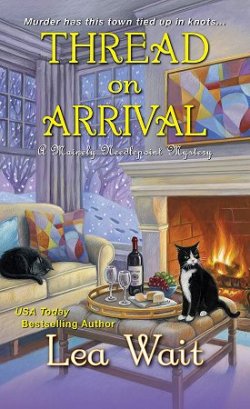 First Line: "How many from Haven Harbor died?"

Ike Hamilton has fallen on hard times. He lives in a garage and subsists on disability checks and deposit bottles. Most of the residents of Haven Harbor know Ike and do what they can to help him out. When Ike is found dead, suspicion immediately falls on the teenage boy who's been living with him the past few weeks.

Angie Curtis is convinced that young Leo is innocent, and in trying to help the boy, she soon learns that, although Ike may have been simple-minded, he knew secrets that may well have gotten him murdered. Now all Angie has to do is trace Ike's bottle-collecting route. He witnessed something that cost him his life, and Angie is determined to uncover the killer.

Although I have to admit that my enthusiasm for cozy mysteries is waning, Lea Wait's Mainely Needlepoint series is still a favorite. Chalk it up to a cast of characters that's always interesting, mysteries that are always intriguing, evocative chapter headings that remind me of the samplers I stitched in my childhood, and a setting that has Maine in the top three on my list of states that I want to visit.

In Thread on Arrival, readers learn about Haven Harbor's annual Blessing of the Fleet, when those who have died at sea are remembered and the boats of the locals are blessed. It's a moving ceremony that is undoubtedly performed in coastal towns around the world where fishermen brave the elements to make a living.

We also get to know Dave Percy, one of the Mainely Needlepointers, better because he is the one who is adamant about helping prove homeless teen Leo's innocence, although others in the group are quick to offer their help. In fact, helping others is one of the themes in Thread on Arrival (and in the series as well).

Needlepoint, helping others, Maine traditions, interesting characters, and a mystery that has a long suspect list-- just five of the reasons why I continue to enjoy this series. If you haven't already, I urge you to give it a try.