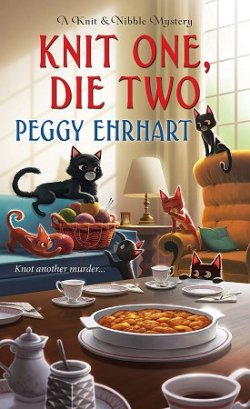 Caralee Lorimer is learning to knit for her upcoming role as Madame Defarge in A Tale of Two Cities, so she's joined the Knit & Nibble group in Arborville, New Jersey. Trouble is, Caralee has never met a person she couldn't antagonize, and when she's found dead under a pile of props, her death is easily explained as an accident. But Knit & Nibblers Pamela and Bettina aren't so sure. They set out to find a pattern of clues that's sure to have a killer wanting to stitch them up.

Peggy Ehrhart's Knit & Nibble cozy series has been very enjoyable up to this point. The mysteries to be solved, the camaraderie of the knitting group, the types of articles Pamela has to edit for her craft magazine, even the cooking... everything combined to make a fun series. But Knit One, Die Two is another story.

The mystery is solid, but the repetition is the real killer in this book. Every single one of Bettina's outfits has to be described in detail down to the shoes and jewelry. I lost count of how many times we were told Bettina's dishes were sage green pottery, ditto the description of Pam's favorite mixing bowl, and don't forget both women have napkins they purchased at the craft shop. Then there are the seven cats that are fed multiple times per day. It's not a good sign when I want to start making hash marks on a piece of paper to learn the final totals of how many times the same things were mentioned in the story.

Unfortunately, I have to say that Knit One, Die Two has too much Martha Stewart and too little mystery. I do intend to read the next book in the series, but it will be with trepidation.