The Mermaid's Scream by Kate Ellis 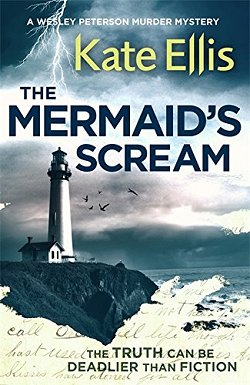 Most blame Wynn Staniland's wife's suicide on the literary legend becoming a recluse. He's been happily avoiding any and all media since the 1980s. But now Zac Wilkinson is working on Staniland's biography, and he's counting on the information he's found to rocket his book to the top of the bestseller lists.

When Wilkinson's body is discovered, Detective Inspector Wesley Peterson's investigation finds links to the unexplained poisonings of a couple at a caravan park-- and Wynn Staniland appears to be the connection.

When Peterson's son becomes involved, the case turns personal. As Peterson unravels decades of secrets and deception, he even suspects that a sinister puppet show might provide the solution to a real-life Victorian murder mystery that inspired Staniland's best-known novel.

When it comes to blending history, mystery, and two complimentary timelines, few can do it as well as Kate Ellis. In The Mermaid's Scream, readers solve murders in both past and present: the murder of Mary Field in the Victorian era and the murder of writer Zac Wilkinson in the present. Alternating chapters from the journals of John Lipton and Mary Field provide clues to both murders because, as we all know, the present is always tied to the past. Ellis also shows us how popular the topic of death was in Victorian England with its murderous traveling puppet shows and high attendance at public executions.

As always with any Wesley Peterson mystery, the characters' lives are important. This time around, Wesley's boss Gerry Heffernan is faced with a surprise, Pam is recuperating from a health issue, and Pam and Wesley's son Michael proves that teenagers' judgment isn't always the best. Ellis has one of the best "families" of characters to be found in a long-running mystery series, and this is the major reason why I never miss a book. She even makes characters who have small "walk on" parts (like community support officer Barbara Smith) memorable.

But Ellis's talents with history and mystery are huge draws, too. There are two houses involved in mystery: Newfield Manor where legend has it that Mary Field was murdered, and Addersacre-- what a sinister name!-- the house where recluse Wynn Staniland lives with his daughter. I found the character of Staniland to have touches of both J.D. Salinger and Ted Hughes. All that being said, however, I do have to admit that I didn't find the mystery to be quite as satisfying in The Mermaid's Scream, although it's still a cracking good read that makes you want to turn the pages faster and faster. By book's end, there are so many people who aren't who they claimed to be that I needed a scorecard as I tried to sort them all out.

Still, that's a minor quibble when I think of the rest of the book and its characters-- and the consistently high quality of this remarkable series. If you haven't sampled one of Kate Ellis's Wesley Peterson mysteries, I highly recommend them. It is possible to read them as standalones, but since the characters' lives are integral to the books, I do suggest that you begin at the beginning with The Merchant's House.