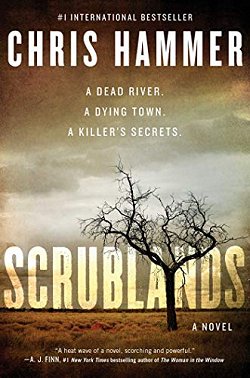 First Lines: The day is still. The heat, having eased during the night, is building again; the sky is cloudless and unforgiving, the sun punishing.

A year ago, an isolated rural community plagued by endless drought faced the unthinkable: the local priest killed five parishioners before being killed himself. Now journalist Martin Scarsden is there to write a piece for his newspaper. How have the people of Riversend coped with the tragedy during the past year?

It doesn't take long for Martin to realize that the accepted conclusion made by police, media, and townspeople may be wrong. And just as he feels that he's making progress, the bodies of two backpackers-- missing since the shootings-- are discovered in a dam in the scrublands, a deserted backwoods marked by frequent brush fires. Once more, Riversend is buried alive with a heaving mass of representatives from every branch of the media, and Martin's job just got a whole lot harder. What was the real reason behind the priest's shooting spree, and does it connect to the backpacker murders? As strange things happen all around him, Martin finds himself risking everything he has to learn the truth-- even his life.

From the very beginning, Chris Hammer's Scrublands grabbed me by the throat and drew me right into the heart of the story. For one thing, I love reading books written by people with a literal as well as a poetic understanding of heat. Must be because I've lived in the Sonoran Desert for many years. But it was also the story itself that wouldn't turn me loose. Why would a young priest-- one who's well-liked by almost everyone in the community-- take a rifle and murder five people?

There are many things to ponder in Scrublands. Martin's own PTSD from an assignment in the Mideast. How PTSD has affected the entire area around Riversend for years (a section that contains some of the best writing in the entire book). And then there's the ambiguity of the town's name. Is it River Send or River's End? Yes, there are many things to think about, just as there's an excellent story to enjoy.

The solution to the murder of the backpackers came as more of a surprise than it should have, primarily because the priest's story took center stage. This book was racing full-out to my Best Reads of 2019 list when it faltered yards before the finish line. What happened? When the story was being wrapped up at the end, there were just too many people with too many motivations. I almost felt as though I needed a scorecard. Be that as it may, Scrublands is still a cracking good read that I certainly recommend. I look forward to other books by Chris Hammer.