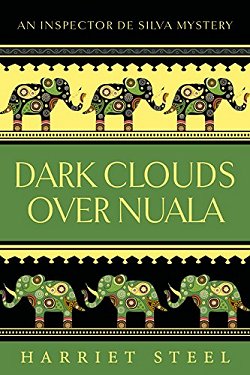 First Lines: New Year's Eve 1933. Western Australia. As the minutes to midnight ticked away, ever greater numbers of revellers crowded into the noisy bar.

The most prestigious entry on the 1935 racing calendar is the Empire Cup, and with the added bonus of the presence of the heir to a British earldom, everyone in the hill town of Nuala wants to go to the race course to take a look and add to the gossip mill. Others, like Inspector Shanti de Silva and his wife Jane, have been invited to dinner at the Residence to meet the heir, Ralph Wynne-Talbot and his wife Jane. The couple is stopping in Ceylon (Sri Lanka) before boarding a ship bound for England, and entertainments have been planned for them. But their hunting trip goes horribly wrong when someone dies.

Inspector de Silva is summoned to the scene, and it doesn't take him long to decide that this death is not an accident; it's murder. Now all he has to do is prove it, and that won't be easy with a rich Romanian count, the count's glamorous wife, and a mysterious British army officer (and all sorts of British government officials) to deal with.

After having read the first book in the series, Trouble in Nuala, I looked forward to reading the second entry. I was not disappointed. I enjoy the relationship between the biracial couple of de Silva and his wife Jane. They met and married later in life, and not only are they deeply in love, but de Silva also values Jane's opinions on all sorts of subjects. It doesn't hurt that Jane is an Agatha Christie fan so she can provide some help in solving her husband's mysteries.

Set in the 1930s, Steel's series shows some of the problems and culture clashes of colonial-era Ceylon (now Sri Lanka). In Dark Clouds Over Nuala, these problems mainly consist of native-born de Silva circumventing the British Old Boys Network in order to solve a crime involving a prominent British family. The mystery is a convoluted one, but I recently watched an episode of Miss Marple that helped me find my way through all the clues. (No, I won't tell you the episode!)

The author does an excellent job of providing enough background in each book so readers won't feel lost if they pick up a volume in the middle. This also helps if a reader just wants to sample and not to commit to the entire series. Steel's books satisfy on several levels: characterization, mystery, and the food and culture of Sri Lanka in the 1930s. I'll be coming back for more, and-- if you sample one of Inspector de Silva's mysteries-- chances are that you will be, too.