Trouble in Nuala by Harriet Steel 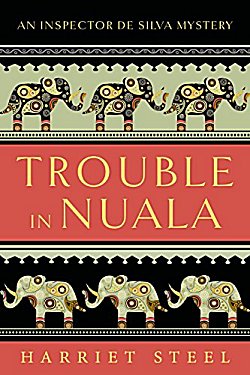 First Line: Inspector Shanti de Silva exhaled a deep sigh of relief as the train left the sweltering lowlands of Colombo and commenced the long climb to Kandy.

After moving from the city of Colombo to the hill town of Nuala, Inspector Shanti de Silva and his wife Jane appreciate the slower pace of life. All that changes when a mix of a cruel and arrogant plantation owner, his lonely wife, and a crusading lawyer turns deadly. The inspector is going to need all of his experience to solve this crime.

Inspector de Silva and his English wife Jane waited until they were in their forties to marry. Yes, they'd finally met the person they wanted to spend the rest of their lives with, but they were also old enough to know their own minds and not care about any raised eyebrows. Why the raised eyebrows? Because it is 1930s colonial Ceylon (Sri Lanka) and mixed marriages aren't quite the done thing. Shanti enjoys reading classics like Sir Walter Scott's Ivanhoe while Jane prefers Agatha Christie. Shanti loves the spicy foods of his native Ceylon and finds English food bland and heavy. Jane would never eat chilis for breakfast. These two main characters in Harriet Steel's Trouble in Nuala are fun to get to know-- and there's more.

This book has a marvelous sense of time and place. Readers learn about a country under British colonial rule and the problems with which it must deal. Not only that, but the descriptions of the landscape and wildlife of Ceylon are vivid and help to bring the whole book to life. Two examples:  farmers set off firecrackers to scare away wild elephants and prevent them from destroying crops, and then there are stunning scenes like "the startling lime-green splash of a paddy field where egrets stood like white question marks."

Although the killer's identity isn't all that difficult to deduce, my appetite for the other books in this series will not be denied. The only real problem I have with Trouble in Nuala is that it's too short!