The Wolf and the Watchman by Niklas Natt och Dag 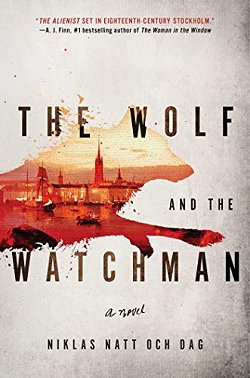 One morning in the autumn of 1793, one-armed watchman Mickel Cardell is awakened from his drunken stupor and dragged to the Larder, a putrid bog on the outskirts of Stockholm. The body he hauls from the raw sewage is bizarrely mutilated, and Cecil Winge, the lawyer it is entrusted to, insists that Cardell helps him solve the case. But time is short: Winge is in the last stages of tuberculosis, the monarchy is in shambles, and rumors of what is happening in France are everywhere.

The two men's investigation peels back layer after layer of a brutal world, and it would appear that every level of society has had something to do with the corpse from the Larder.

The Wolf and the Watchman immediately immerses the reader into the world of 18th-century Stockholm-- and be sure to cover your nose. People take a bath once a year, and they're completely unconcerned about the raw sewage that seems to be everywhere. After all, it's so cold for much of the year, it's frozen so it won't smell. Much. While navigating through the filth on Stockholm's streets and listening to the rumors of guillotines in France, the brawn of Mickell Cardell and the brains of Cecil Winge go to work to uncover the identity of the corpse that was dumped into the Larder. Winge has to steer a path through all the corruption, paranoia, and conspiracies in the Chamber of Police while Cardell and his violent temper must work the mean streets of the poorest sections of Stockholm for clues. They are a good pair for both are more than the sum of their parts.

We then learn about a poor farm boy, Kristofer Blix, who comes to Stockholm for a better life and learns just exactly what he will do to survive. In a similar situation is orphan Anna Stina Knapp, who's turned over to the workhouse by a parish priest more concerned with his own comfort than that of the welfare of his congregation.

I loved watching all the various pieces of plot and story come together. Would Winge survive long enough to solve the case? Would Cardell survive his PTSD-induced rages and alcoholic blackouts? I have to admit that the wealth of historical detail went a bit overboard for me. Especially when it comes to lack of personal hygiene and any sort of sewage containment, a little goes a very long way. It even-- no pun intended-- bogged down the pace of the book from time to time.

The true strength of The Wolf and the Watchman was in its characters, and its strongest character, for me, was Anna Stina Knapp. It was not an era for a poor and pretty female, and I loved how she refused to give up. Yes, watching the bits and pieces of the story slot into place like a Rubik's Cube and watching every character fight against the odds made this book a winning read. I will be interested to see what Niklas Natt och Dag writes next.