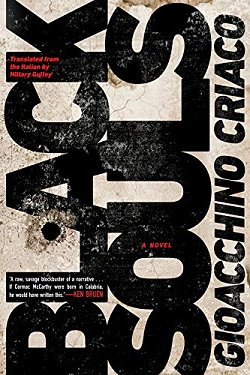 First Line: We walked at a clip, wresting ourselves from the damp embrace of the heather and ferns.

The remote Aspromonte Mountains in southern Calabria, Italy, is a land of abject poverty. In order to survive, most must resort to a life of crime, especially organized crime. Black Souls is the story of three best friends who at first begin to rob businesses in order to have better clothes to wear to school. Brainy Luciano, happy-go-lucky Luigi, and the nameless narrator of this tale have a taste for the life, and as time goes by, they branch out into kidnapping, contract killing, and dealing drugs.

There is a lot to learn in Black Souls: local legends, the history of peasant rebellions, myths, and colonial suffering, and everything blends into a tale about how violence begets violence that's difficult to stop reading.

From its pastoral beginning to its strong finish, I found this book weaving a bit of a spell over me. Yes, the background and history of Calabria were fascinating, but what pulled me in was the voice of the narrator. You wouldn't think a reader like me who has led a rather sheltered life would get pulled into a story about three men who were good at killing people and flooding Italy with drugs-- but I did.

It had everything to do with that narrator's voice. His is an unflinching look at the life he and his friends led. Nothing is held back. His tone is completely matter-of-fact; nothing is glorified. There's never any posturing or "Hey, Ma, look at me!" The narrator never once says that what he did was right. In fact, throughout the book, readers will get the exact opposite feeling. Black Souls was a lot more than I expected to find, and that is a very good thing. It's the type of book that will stay with me for a long time.