That Churchill Woman by Stephanie Barron 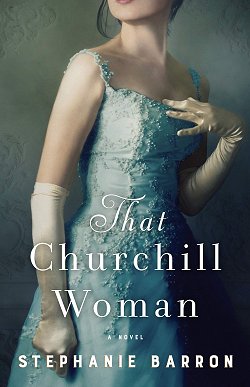 History isn't always kind to the women who give birth to great men. Winston Churchill is the man who defined the twentieth century, and it's safe to say that many of his early biographers would have preferred to ignore his parents completely. Winston's father, Lord Randolph Churchill, was a promising politician who died of syphilis, but that was easier to cover up and ignore than Winston's mother, American heiress Jennie Jerome.

Artistically gifted, athletic, and politically astute, Jennie lived her life with passion and just the way she wanted to, which was definitely not to the liking of the male biographers of Winston's day. No, indeed. Those biographers would have much preferred Sir Winston to have sprung fully formed from the forehead of Zeus.

All this means that Jennie Churchill has been given short shrift over the past century, but no more. Author Stephanie Barron's elegant, in-depth research shows this extraordinary woman in all her beauty, courage, intelligence, and unbelievable loyalty. Barron does a wonderful job of laying bare Jennie's motivations and choices, and the important part her father, Leonard Jerome, played in her life.

Since Jennie has not received fair treatment from biographers over the years, Barron is very carefully even-handed in her portrayal of her. Readers see the questionable, the contradictory, as well as the good. The author wants readers to form their own opinions about this remarkable woman, and although I appreciated not being told how to feel about Jennie, I felt Barron's approach was a bit too careful, a bit too even-handed. The book felt a bit dispassionate, which stripped some of the color from the narrative, and the characters failed to fully come to life for me.