Too Late to Die by Bill Crider 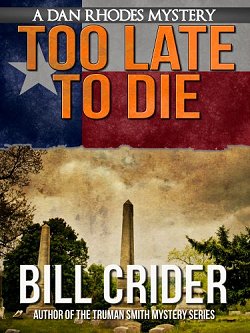 First Line: It was another damn election year, and if there was one thing that Sheriff Dan Rhodes knew for sure it was that Hod Barrett wasn't going to vote for him this time either.

When a pretty and well-liked woman is killed in her own home, Blacklin County Sheriff Dan Rhodes has a Texas-sized problem on his hands. He's already having to contend with a rash of burglaries, and he's running for reelection against a wealthy man who knows how to schmooze any crowd he comes in contact with. But having a killer on the loose is more important than all the other things on his plate. What he doesn't quite take into consideration is how many of his neighbors' secrets he's going to uncover while he's solving the case.

Bill Crider's Dan Rhodes mystery series is one that I've been meaning to get around to reading for a long time. Many of you know how it goes. But a recent recommendation nudged me in the right direction, and I picked up this first book in the series.

I enjoyed Crider's gentle sense of humor throughout the book. Whenever Sheriff Dan Rhodes has to tell someone something he (or she) doesn't want to hear, the first thought through his mind is, "Well, there goes another vote." Rhodes is a genuinely nice guy who's fairly well acquainted with all the folks in his county. Speaking of those folks, Crider's provided his sheriff with a good supporting cast, including his daughter Kathy, Mrs. Wilkie (who has the hots for this widowed lawman), and Ivy, a strong, intelligent woman who's running for justice of the peace. The only problem is, he doesn't always make use of that supporting cast. He likes to ponder a case, and when he thinks he may have all the puzzle pieces in the proper places, he runs off to check it out all by his lonesome. I can see times where that's not going to be such a good idea.

With a main character who has an independent turn of mind, it's a good thing Bill Crider has a lot of talent when it comes to adding elements of surprise and writing action sequences. I can see that this is a series that I'm probably going to enjoy a lot. I may even wind up adding Dan Rhodes to my list of favorite fictional sheriffs.