The Burglar by Thomas Perry 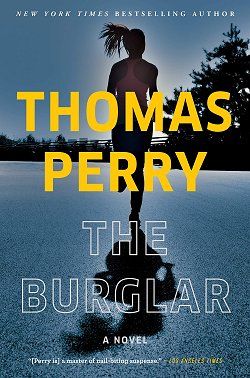 With the right combination of intelligence, looks, and skills, Elle Stowell has gone far in her chosen profession: burglary. It's easy for her to stroll through the swanky Bel Air neighborhoods and pick the perfect homes to break into and steal the most valuable items. But when she breaks into the home of a wealthy art dealer and stumbles upon a triple homicide, Elle discovers that someone is searching for her-- and leaving a trail of bodies in their wake as they do so.

Her knowledge of the high-profile murder has made her a target, and her skills as a burglar are going to have to help her uncover the truth before she becomes the next victim.

I am a big fan of Thomas Perry's Jane Whitefield mysteries in which Jane helps people disappear. Reading passages in those books makes readers feel as though they're reading a textbook on how to leave your old life behind and start all over again. You get that same textbook feeling reading The Burglar, but the reading enjoyment was much lower for me.

The repetition is deadly in this book. We are told over and over how pretty Elle is. How smart she is. How good she is at being a burglar. We are told over and over of her wardrobe changes and her rental car trade-ins. Over and over, world without end... This might have worked-- I might not have noticed all the repetition-- if Elle's voice hadn't been so dispassionate. As if everything she says must be taken as fact and it's useless to argue with her because she could care less what you think.

But I do insist on arguing with her. She may be pretty, and she may know how to trade in rental cars and choose just the right outfit for each occasion, but she's not nearly as smart as she likes to think she is. She knows someone is following her, someone who committed a triple homicide. What does she do? Go to a friend's house to stay. In another instance-- having even more proof that she's being followed-- she attends a funeral and is surprised by what happens there. There are even more examples of Elle being Too Stupid To Live, but there's no need to list them all. Seasoned crime fiction readers will know what I mean. This character was driving me insane.

The only thing that kept me going was the fact that I insisted on knowing what was going on, why it was going on, and how it would all be wrapped up. That was interesting, and it helped that the point of view at the end switched from the smug, flat-voiced Elle. My ear needed a rest from her, and the different point of view helps readers see how everything fit together.

At the end of The Burglar, I was happy to know how everything turned out and even more thrilled in the knowledge that I'd never have to spend any more time with Elle Stowell. If you've wanted to read Thomas Perry-- and you should-- it's better to stick to a standalone like The Butcher's Boy or his Jane Whitefield series. This is not one of his better books.