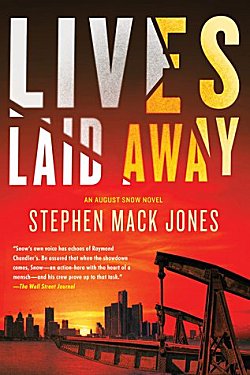 Detroit ex-cop August Snow is given the photo of a young Hispanic woman whose body was found in the Detroit River in hopes that someone in Snow's home turf of Mexicantown will recognize her. Someone does. The victim is Isadora del Torres, and she's not the only young woman to have disappeared during an Immigration and Customs Enforcement (ICE) raid, only to turn up dead a few weeks later.

Preyed upon by the law itself, the people of Mexicantown have no one to turn to except August Snow, the son of an African-American cop and a Mexican-American artist. Snow will not stand by and watch his neighbors suffer in silence and soon finds himself on a wild ride across Detroit, visiting neo-Nazi biker dens, hip-hop recording studios, seedy nightclubs, and the social clubs of the rich.

I really enjoyed Stephen Mack Jones' August Snow and looked forward to a new book. Snow won a wrongful dismissal suit against the Detroit Police Department and the City of Detroit, and he's used the $12 million settlement to renovate the houses of Mexicantown one at a time. He's bringing his neighborhood back to life, and I really like that. From Snow's voice to the book's secondary cast, from the information about Detroit to its tone of pragmatic hopefulness, the first book really had me looking forward to the next one. Unfortunately, I wasn't particularly happy with what I found.

If your outlook on immigration-- both legal and illegal-- tends toward the conservative, you're not going to like this book. I had no problem with the book's more liberal viewpoints and having some of the people in the Immigration and Customs Enforcement agency be bad guys didn't bother me either. In the opening pages, Lives Laid Away was set up as Snow seeking justice for two murdered girls most law enforcement would consider throwaways. The Harry Bosch in me was rubbing my hands together in anticipation, but what followed was a disappointment.

The entire book devolved into Rambo (Snow) and sidekick loading up with weapons and heading to one shootout after another. I've never been a fan of Sylvester Stallone or the My-Gun-Blows-Bigger-Holes-in-People-than-Yours-Does school of film and fiction, so reading rapidly became a chore. So... a bit of a sophomore slump that makes me wonder if I want to read a third book in the series.